Obama; "Death Of A Salesman" 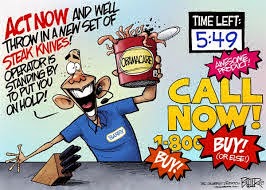 America seems to be slamming the door these days on the greatest salesman of the 21st Century.  The liberal Gannett Corporation's USA TODAY ran a poll last week and it appears Obama's salesman days are over.  67% of Americans still oppose Obamacare despite Obama's minions spending hundreds of millions of taxpayer dollars to promote it.  Rap stars, movie stars, and a number of the 30 million getting healthcare for free still couldn't win over America to socialized medicine.  Only 38% approve Obama's efforts on the economy and his foreign policy grades are even worse.  Even more bad news for Obama; the pollsters reported the most support for Republican initiatives, the most since 1980.

It was a nice run, Barack.  Let's just look at how successful Obama has been in selling truckloads of snake oil during the past 6 years.

In 2009 Obama travelled to the Middle East, bowed deeply to Saudi royalty, gave notice to Iraq that we're done there, giving Islamic militants the date when they could resume terrorism, flew over to Cairo and announced that America was nothing special, praised the great legacy of Islam and then flew to Stockholm where they gave him the Nobel Peace Prize after less than three months in office.

The tag team of Eric Holder and Barack Hussein Obama announced they wanted America's guns and gun makers sold more guns than in the entire 230 history of the Republic.

Gun running:  Again, Eric Holder and Obama teamed up again to supply 2,000 automatic rifles to Mexican drug cartels and they used them to kill American innocents and a border patrol officer...and Obama and Holder ran a beautiful cover-up by throwing Kool Aid parties and apathetic Americans drank often and deeply.

Immigration:  For six years, and through two elections, Obama has promised 30 million illegal Mexicans that he was gonna get them a job, a green card, a food stamp card and a free ride on the American gravy train.  Having failed to deliver he simply legalized two million of them, then stopped deporting them altogether.  That's not good enough for illegal Mexicans; they want instant citizenship and Obama's support from Hispanics is rapidly fading.

Health care:  Obama promised that your premiums would be cheaper and if you want to keep your doctor, you can, and it wouldn't add a dime to the deficit.  Already a trillion dollars in the hole, the program did not get enough young people to sign up so your tax dollars must make up the difference.
Massive sales failure.

Benghazi:  Obama and Killary joined forces to sell America on the idea that a cheap anti-Muslim movie was responsible for the deaths of four Americans in Libya.  Obama was able to sell that to the American people long enough to win re-election.....until this last week when we learned that the administration knew that this was a terrorist attack and they failed to act in a rescue attempt, and actively participated in a coverup.

Employment:  For over three years Obama has been able to fudge the numbers to make it look like the unemployment rate is declining.  Then the Labor Department announced that over 900,000 more Americans gave up and left the labor force last month.  That leaves the labor participation rate the lowest since 1950 and more than ten million Americans have permanently left the labor force during Obama's Presidency.  "Hey, if the aint' looking anymore, we don't have to count em".

Personal Income:  Obama trots out to the Rose Garden weekly and trumpets the call for a raise of the minimum wage.  Yet while personal income grew over 7 percent during the Bush years, personal income has decline over 3% since Obama took office.

No matter the product, we have heard Obama's sales pitches hundreds of times.  We can recite them by rote as easily as a GEICO commercial...and America just ain't buying anymore.
Posted by A Modest Scribler at 2:00 AM

Of course we are not buying anymore, does it make any difference? All the progressive left has now is a blatant seizing power play, they have come too far to let it slip away. I believe it is going to get ugly!

It is about time people wised up to the person with his head hidden in his own orifice.

Milton Friedman — 'If you put the federal government in charge of the Sahara Desert, in five years there'd be a shortage of sand.' So true, especially under this current administration.

Whenever a new crisis comes up, he pivots to something else to try to sell.. Now its the farce called "climate change" or some such nonsense. The messiah is running out of tricks. He should be impeached for fraud!!

Steve, you only need to see the price of gas to prove Friedman's point; we've far more gas supplies than five years ago and the price of gas has doubled, simply from government interference in the free market.