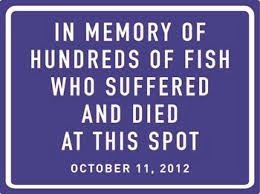 California, whether I liked it or not, was in my consciousness yesterday.  First, I was driving around, running errands and listening to National Public Radio's "Fresh Air" program.  The guest was a Democratic Assemblyman from northern California.  This discussion was about a bill he's introducing in the California state house next week that will ban filters from cigarettes.  His argument was that, while cigarette paper and tobacco will break down into a compost quickly, the cellulose filter on a cigarette might take years.  When the NPR host asked him about the increased health hazards of smoking a cigarette without a filter the Assemblyman said "well that's their punishment for smoking".

Now, at first, I thought that this liberal politician was a bit hard-hearted but then I learned that the fellow is one of Sacramento's most ardent supporters of the Northern Smelt…so much so that he voted to deny Central California farmers millions of acre feet of water to irrigate their crops, lest a few smelt bite the dust.  Whew!

Surprisingly, the NPR host was something of a bulldog.  He asked this Assemblyman why California is so over regulated, citing the state's issuing over 10,000 tickets last year for jaywalking, imposing union like labor laws on the smallest businessman, and requiring fuel refining that exceeds even the tough federal standards, a requirement that adds nearly ten percent to the cost of a single gallon of gas.  The liberal Assemblyman said California imposes rigid standards because they enjoy a superior lifestyle than the rest of America.

Well, I then returned home and read an article on Yahoo News reporting that the Colorado River is drying up and will very soon be unable to support the water requirements of the three states that use it; Arizona, Nevada and California.   I recall it was just twenty years ago that California was whining about not getting more of the Colorado's water.  After years of court fighting the feds stepped in and convinced Arizona to provide a share of this state's water allotment, thus violating an agreement that was written more than 75 years ago.

However, now California is whining again.  While both Arizona and Nevada have cut their water usage more than 30%, California insists on more and more of the Colorado's water.  While Phoenix and Las Vegas were digging up lawns and using "desert landscaping" Californians insist on green lawns, swimming pools and long luxurious showers; this despite the fact that the entire Southern California region owns no water sources of their own and must sponge from the northern end of the state, and the Colorado.  Nor is the state at all concerned that, if they sent those 11 million illegal Mexicans home there would be plenty of water for all.

California is further hampered by a liberal state house that has controlled events in that state for the last thirty years.  Results?  Annual budget deficits that represent 25% of their entire budget.  While Los Angeles and all of Central California has become nothing more than a Latino war zone, Sacramento Democrats pass laws on filtered cigarettes, jaywalkers, a ban on fitted sheets in hotels and motels (hurts the maid's back to make the bed), vacation and sick pay for the family babysitter and a ban on the flow of water to the very farmers who pay the state's bills.

Yes it is. These politicians are why I now call AZ home and have no sympathy for what's coming to
California here in the near future. The whining has yet to truly begin. I grew up in the wonderful Sam Fernando Valley. What a great place to grow up then. What a cesspool now. How do you say? Sad damned sad

Good morning. It is finally raining here in northern Kalifornia.I am all for cutting off water to LA(raza).Ever since I was a kid we took military showers,conserved water, and the way our thankful liberals assclowns say thank you is by raising water rates.You are quite aware and correct about how stupid the sacramento idiots are. Enjoy the Super Bowl.

Havasu Rob, I grew up in the central valley, a little town of 2,000 back then. Never locked our doors or windows…a beautiful little town to grow up in. Now it is 20,000 and more than half are illegal Mexicans..graffiti everywhere, soaring crime and security doors are now a must. Sad. Damned sad.

Glad to hear you're getting rain up there, Craig! Saw on the news the other day a lot of hippies doing rain dances (not kidding!). My sympathies with your state house who meet all year and dream up new and sillier laws.

In Arizona our reps only make $24k a year and are in session for two or three months of the year…less time to gum up the works.

Your reps make about $150k plus per diem and free cars and are a disaster.

I too have abandoned the Peoples Republik of Kaliphorniastan 6 years ago. Sure the Bay Area is beautiful, but the liberals have all but destroyed the entire state with their insane policies! I have lived in Las Vegas for the last 6 years and will never again live in CA!! If they want more water, they can build desalinization plants near the ocean and pipe in all the water they want!