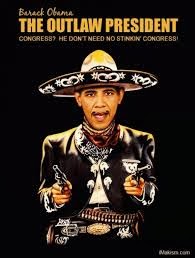 This week the Republicans all but ruled out passing immigration reform this year.  They cite a lack of confidence that any immigration laws passed by Congress would simply not be enforced; especially the punitive aspects of the law that might stem the wave of invasion.  I'm not surprised.

It was only last week, during the State of The Union speech, that Obama pledged to issue executive orders to achieve any socialist goals that the Congress should fail to act upon.  As he has done for five years now, Obama has declared himself Emperor and used his dozens of Czars to circumvent both the Judicial and Legislative arms of our republic.

Obama has established a long and miserable record of defying all manner of our nation's laws.  His first assault came from an attack on contract law, the very law sanctified more than five centuries ago..the law that deems that two parties who mutually sign a contract are bound by the terms of that contract until it expires.  But Obama, in an effort to curry favor with his army of tit-suckers, immediately began to attack the banks on mortgage loans.  Obama and his minions chose to ignore that millions committed income and documentation fraud to buy homes they could not afford.  Millions more, riding the up sweep of rising home prices, took out second mortgages for swimming pools and new furniture and even trips to Europe, then when the housing market collapsed they cried foul!

So Obama took executive action to force banks to write off bad mortgages, and to write down the principal on homes now overpriced in the housing meltdown.  At the time I wrote several blog essays about the long term effects of violating contract law…that it only encourages slackers to walk away from commitments they were all too willing to make when they first signed on.

Then, not content to destroy contract law, one of the pillars of a civilized society, Obama began abusing both civil and criminal laws.  His first foray into lawlessness came through executive order; he instructed Immigration officials to ignore immigration laws and cease deporting those who violated our borders.  When Arizona tried to stop the massive invasion of illegals into Arizona through SB1070 Obama sent his Attorney General into the state to sue both the state as well as law enforcement officials whose only crime was enforcing the immigration laws currently in  place.

Finally, last year Emperor Obama declared over two million illegal Mexicans free from prosecution and granted blanket amnesty to the so called "dreamers".  (We have thousands of "dreamers" here in Arizona; they love robbing Circle K's and 7-11's and dealing drugs and conducting home invasions and murdering innocents and participating in long car chases…"dreamers indeed")

So, last week, after giving the matter much consideration, after holding their annual party conference, the Republicans considered an immigration bill.  Not as forgiving or as comprehensive as the one that emerged from the Senate, but a bill that would address immigration problems, item by item.

Then, they heard the words of the President, fresh from the SOTU speech, the boast that he would issue executive orders if Congress didn't give him what he wants…..and they remembered all of Obama's many breeches of the law, his circumvention of the U.S. Constitution time and time again, then said to themselves "why in the world would we trust this guy to enforce any law we pass?"

So, in the greatest of ironies, Obama will not get to play "savior" for 30 million illegal invaders…and all because he has shown a disdain for the law during his entire Presidency.

Glad.  Damned Glad
Posted by A Modest Scribler at 3:06 AM

How long will it take the little boy obummer to start his typical racist type temper tantrum? He needs a long "Time Out".

The clearest way to show what the rule of law means to us in everyday life is to recall what happened when there is no rule of law- Dwight D. Eisenhower

Havasu, if I remember correctly it was the Magna Carta in England that brought about the sanctity of contract. After the English began to adhere to contract law their civilization advanced greatly, their economy boomed and they became the most powerful country on earth.

Only Communists and Socialists frown upon the idea that both parties to an agreement have an obligation to honor all tenets of that agreement. I hate to be an extreme alarmist but when I see Obama circumventing or selectively ignoring or enforcing our laws, perhaps he really is hell bent on our total destruction….better to establish a socialist state.

I hate to burst your bubble, but if you think the republicans are not going to cave on immigration, you are dreaming. The republicans cave on EVERYTHING. They don't even know what they stand for. Think back, What was the last thing the republican party didn't cave on? Don't get your hopes up.

RL, you may be right….I'm gonna keep hoping though…I don't think the Speaker would have said that if he didn't have a significant number of his party saying they wouldn't vote for immigration reform.

Last I heard there will not be any immigration bill coming from the House. Why bother when it will be killed in the Senate by the Santa Claus party.. Harry Reid would see to that! By not sending an immigration bill, there won't that ammunition the Dems could use against the Republicans. Now they can just use OwebamaCare against the Dems and wait for the voters to dish out their feelings on those who have supported this train wreck..