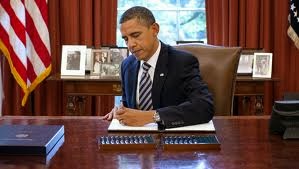 If you've been keeping up with Obama's attention grabbing executive order to raise the minimum wage you know that only 4% of all jobs are paid at minimum wage.  You should also know that every economic study done over the past 70 years shows that raising the minimum wage more than a few percent always results in fewer minimum jobs available.

As we've mentioned here before, minimum wage jobs are meant for young folks; it has always been intended for kids without works skills.  No rocket science required here…..it simply teaches a kid how to show up for work on time, work as a team, and learn a few basic skills.

However, with the decline in education, American schools are turning out illiterates not qualified to work at anything except minimum wage.  Now the Obama/Reid/Pelosi regime are insisting that these jobs be paid a "living wage".  Good lord!  These jobs were meant for teenagers so that they could buy school clothes, see a movie, or buy a CD occasionally.  They were never meant to be "living wage" positions.

Obama, being the head socialist, has upped the ante.  He has now ordered all mentally challenged to receive the higher minimum wage as well as all employees who support a government contract.

And here's what happens every time liberals boost the minimum wage more than ten percent or so:

There's a mentally challenged kid who works at a small burger joint in my neighborhood.  It's not a national chain.  It is owned and operated by a senior citizen who invested part of his retirement money in a place that would give him something to do each day.  He knows all his coffee regulars; those who aren't enamored with Starbucks, who prefer Farmer Brothers coffee and a little conversation to $7 dollar lattes.  The wife bakes a meatloaf for the "blue plate special", or another day will offer spaghetti and garlic bread for $5 bucks.  This little greasy spoon hired a mentally challenged kid whose mother brings him to work daily.  The kid gets a free hamburg and all the soda he can drink for wiping tables and swinging a mop every couple of hours.  The old man has to come in behind the kid and wipe the tables clean cause the kid keeps forgetting to rinse his cleaning rag.  For this, the kid gets $7.50 an hour.

But Obama gets his way the kid will be unemployed.  The old man just can't afford the extra hundred bucks a month for a job he's offering out of kindness.

The same is true for hundreds of thousands of small businesses across the land.  Raising the minimum wage from $7.50 to $10 bucks an hour for a teen worker, or an illiterate adult, adds $500 bucks a month, per employee, and that's something that the "non-MacDonald's" can't afford.  So, the small business guy will make do with less; he'll hire fewer workers and work a little harder himself, just to stay in business.

And, as to those small businesses that have federal contracts?  These aren't Boeing and Raytheon, folks!  These are small cleaning businesses that come in and clean government and military offices, who wash windows, who provide farm grown vegetables to the chow hall or commissary.  These little businesses, unlike Boeing, who sells the Air Force a $100 million dollar fighter jet, can't absorb the costs of paying employees $10.10 an hour and still make a profit!

So all Obama will achieve with his spanking new executive order will be to award contracts to the big chains, the Roto Rooter, the national cleaning companies, the big facility maintenance firms…and all those little business guys will be out of business.

And so millions of teens, and thousands of those "special education" kids will not have a chance in hell to getting one of those minimum wage jobs.  And, as usual, the liberals will have totally failed in getting the results they wanted…simply because liberal brains are wired for insanity.

His socialist union buddies also back raising the minimum wage, since that is how union wages are figured.

Craig, it's a double whammy; he's able to please the unions as well as the green check crowd.