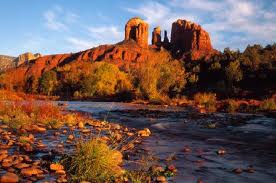 Arizona is still a state where the 'old America" lives.  We have gold miners and copper miners, and cattle ranchers with calloused hands and leathery faces.  Our "white collar" get up in the morning, stop at Starbucks, then ride the elevators in downtown Phoenix, high up into the skyscrapers, then sit behind desks and look out on a valley where thousand year old Indian canals still ferry the precious water that irrigates our cotton and citrus and winter vegetables.  Our "blue collar" wrap the peanut butter sandwiches, grasp the commuter mug, hustle the kids off to school, then set off to work a factory floor at Motorola or Intel or peel off for insurance offices, mattress stores, restaurants, or construction sites.  Our older folks, the retired (willingly or not), awaken, attend church, early morning swim or yoga sessions, then  file out to serve as volunteers at soup kitchens, food banks, hospitals, and schools, where they serve for free as teacher assistants.

America at work.
Arizona, land of the "old America",  is under constant assault by the "new America".   You see, Arizonans, though three thousand miles away, still hear the peels of liberty from the Liberty Bell, perhaps far better than those who now dwell in Philadelphia.  We place greater value on a Constitution written some 230 years ago, perhaps more so than those who live just steps away from Freedom Hall.  We don't enact gun laws that serve no purpose except to take guns out of the hands of law abiding citizens.  And we're more than willing to use those guns to protect our home and our families.

Perhaps, though we live three thousand miles from the Statue of Liberty, we honor and revere her just a bit more than those who live in her shadow.  Having suffered from massive illegal immigration, we know all too well the infinite value of those who come here legally, with the hopes and dreams carried by millions before them; to seek a better life.  We honor those who arrive in the clear light of day, and deplore those who sneak across the border in the dead of night, with backpacks stuffed full of pot, or heroin or meth to finance their journey.  We in Arizona have never bought into the creed "Give Us Your Tired, Your Poor, Your Drug Merchant".

Arizona, where the American dream lives on...

Arizonans dream big.  They see life as opportunity, where every road is open, where anyone who's willing to work hard can realize their dreams.  Perhaps it's because we live in such wide open spaces, where we're given room to grow, where our ambitions are as wide as the wide expanse of desert skies.  Our politics are conservative,   We believe in spending only what we earn.  We believe in a "hand up" but not a "hand out".

Oh sure, we've attracted transplants from the "new America"; those mavens of liberal righteousness from Oregon and California, where, having driven those states into fiscal socialist ruin, flee to Arizona because the mess they created is no longer "habitable".

So they come to Arizona and demand that we change to accommodate to their social theorems and philosophies.  These liberal transplants are offended that our Sheriff adorns his prisoners in pink underwear and feeds them baloney sandwiches...and when they complained about the Kool-Aid, he took it away and told them to drink water.  And when Joe's prisoners complained about the heat in his Tent City Jail, he said our soldiers in Afghanistan endure that same kind of heat, and carry a 60 pound pack on their back as well.  And the liberal transplants don't like it that  our sheriff's in the southern part of the state honor the sanctity of our borders.  Arizonans cheer our Governor when she shows no fear of a President descending royally from Air Force One, only to be lectured about the perils of open borders and blanket amnesties.  But the liberal transplants deplore the lack of "diplomacy" and insist that we bow to the "federales" who sue us in court and gave us Fast and Furious, arming 2,000 of the Mexican drug cartels, costing the lives of our border patrolmen and other innocents.

But, as with "old America", we Arizonans resist!  Unlike California, whose statehouse runs year round, and where their state pols draw $200,000 per year salaries and year round per diem, our state representatives draw less than $25,000 a year and meet only a few months of the year, then go home to live and work in their communities.

Arizonans are nature lovers.  We live with coyote and mountain lion and wolves and lizard and all manner of wild life.  They come to us and we venture often into their world as well.  Arizona is often thought of as desert, yet we have the grand pines and massive winter snowfalls of Flagstaff and Show Low and Pine Top.  We have cool clear brooks and streams abound with fish and serve as haven for all manner of fowl.  We enjoy the culture of our many native American tribes and acknowledge their role in the grand history of the state.  We have high meadows where the spring rains fall gently, and the wind sends the pines and aspens into glorious song.

We don't have earthquakes or tornados or hurricanes.  We're blessed in that sense.  But, in mid summer, the intense heat is often broken by spectacular monsoon storms.  The thunder rumbles and the skies flash in grand lightening displays.  Then, as the first hard rains hit the desert floor, the wonderful scent of creosote permeates the air, not unlike the scent of fresh laundry left to dry on the line outside.  Many of us grab bars of soap and run out in the backyard to bask and bathe in the cooling summer rains.  As the rains intensify the summer heats dissipate and the temperatures drop as much as 20 degrees in a single hour.  When the monsoon rains subside the desert blossoms in a spectacular display of desert flowers.
And when night comes, and the children are put to bed, Arizonans in the "old America" venture outside to witness God's grand display of a million stars shining down through clear desert skies.  And Arizonans, reminded of how small we are, and how grand is our creator, will say a silent prayer in gratitude for what they have...what they, themselves have earned.

Beautiful Arizona....where the "old America" lives on.
Posted by A Modest Scribler at 2:00 AM

You're tempting me to move there.
(From Minnesota)
Thank you!

You really do feel like you're more free here, Bob. The statehouse spends alot of time writing bills to attract business, pays for social safety programs that they must, and spend the rest of the time leaving us alone.

In light of current trends where government is in your face in so many places, that's quite a thing!

That is quite a beautiful picture you put in my head, thanks. Have a great weekend!