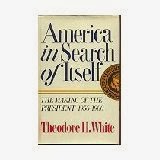 If any of you have more than just a passing interest in history, if you want to ever reach a true understanding of our national evolvement in the last fifty years or so, I don't mind saying that the two finest books to achieve that understanding are written by two liberals.

Theodore White, a Pulitzer Prize winner, covers our history from 1956 to 1980 in a book entitled America In Search of Itself..The Making of The President 1956-1980.  He writes about the rise in activism of the Supreme Court as well as the massively intrusive role that the federal courts had in shaping social policy.   He chronicles the hopes of the Kennedy years, then delves into the Johnson years, the evolution of the Great Society programs, with its effects on everything from business and finance to the government's role in the dissolution of the American family.  He lays out the associated ills that the first of those massive government deficits had on the American way of life, the effect that the Vietnam War had in the breakdown of the American social fabric, and, finally, he describes our descent into debtor nation status as the '73 oil embargo and our abandonment of the gold standard sounded the death knell for the pristine American dollar.

White concludes this book by describing the culminations of these historical ills during the Carter years and why Jimmy Carter was not the man we needed in the White House in those crucial years.

It is ironic that, while White champions many of the social programs that evolved over those years, he finds himself longing for the relative peace and simplicity of the Eisenhower years.  He's fair to his liberal following while freely admitting that big government's efforts to solve our social problems probably did as much damage as they served the good.

What I like about Teddy White's book is that he doesn't write like a Harvard history professor.  Instead, he's the wise Uncle sitting back in the rocking chair and explaining in simple and specific terms how we got where we are.  He overlooks nothing in this 400 page book and after reading it you'll come away with a real understanding of the history of two tumultuous decades of our history.

I've probably read a hundred books on 20th century history….this one is by far the best.


The second book is "The Fifties" by David Halberstam.  Try to imagine that you have another  favorite Uncle who just happened to be a retired history professor.  And imagine when he comes around he sits in a favored rocking chair, sips a bit of sassafras tea, and begins telling you fascinating stories.  That's David Halberstam.  In "The Fifties" Halbertstam tells you every thing that happened in that decade, and how those events would go on to shape the 60's.  He covers the McCarthy hearings, the development of the Hydrogen bomb, Rosa Parks and Martin Luther King, and Joe DiMaggio and early TV, Detroit autos, TV commercials, Sputnik and Marlon Brando and Eisenhower and Nixon and Kennedy and the Mafia.  He tells you about the popular books of the decade and the space race and the U2 shoot down and Kruschev and his shoe and a thousand other things, social, political, historic that happened in the 50's.  It's a big book, not to be taken lightly, not to be read through in one sitting....instead it's that dear old Uncle professor telling you stories in a most pleasant way.  I can think of no better way to learn history and I'm sure you would love this insightful book of America at mid-century.

Good reading!
Posted by A Modest Scribler at 2:00 AM

Thanks! I have been in the mood to read a good historical book. Knowing how we got to where we are is the key to knowing where we are going.

You're welcome, Jerry. I'm sure you'll enjoy them.

$7.64 from Amazon, including shipping! such a deal.

Good on you, Jerry!