Under Assault; The Military Honor Code 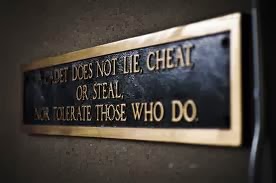 "I will not lie, or cheat, or steal, or tolerate those around me who do"

And sadly also, I'm not surprised.  Our institutional values have been breaking down for a couple of decades now; the belief being that you screw the other guy before he screws you, that you "get it while you can, by any mean, before it's all gone" are popular goals.  Institutional values erosion has accelerated with our current President as he selectively enforces our laws, dependent only if they are politically favorable.  He's even chosen to rape the supreme law, the law of the land, the American Constitution, as he circumvents Congress and issues 'executive orders' so that he can do as he pleases.

So, if the Commander in Chief is cheating, "why not me?" says ten percent of the nation's military missile alert force?

I still spend a bit of time around our military men and you'll be heartened to know the cheaters are the exception; most of our military men and women honor both the law and the moral and value codes unique to the military.   I have found their sense of duty and honor to be far superior to many in civilian life.

Once, long ago, when I was attending United States Air Force Officer Training School, being a "mustang", or prior enlisted airman, I often arose earlier than my fellow trainees and went to chow early.  Each time I came back from chow someone would query "what did they have for chow, Friend?"  And I would concoct something like "eggs benedict" or "three ham omelet" and so forth.  Same thing in the evening:  "Filet Mignon", or some other wondrous dish that the chow hall would never offer.

So, one morning I am called into my counsellor's office.  He sits me down and declares that someone has accused me of violating the honor code.  He then cites the accusation, "lying about what's on the menu at the chow hall"..he then breaks into a smile and said "hey, I had to counsel you that some of these young kids read a little more into the honor code than what is there".  Well, when I returned to the barracks, at a time when everyone was gathered round, I gave a general ass chewing to the group and told them to pull their head out of their ass lest none of us share a joke for the rest of our training.  I did cease with the joke, though…it was no longer funny.

But the current charges are not funny at all.  They reflect on the prestige and honor of the entire military so it's a sad thing to see.

Not long ago I wrote a blog on the military being one of the last bastions of American pride and honor. While our Congress has become corrupt, as our "man-child President" has declared himself "Emperor", we have very few American institutions free of greed and graft and grabs for power.  It is my fervent wish that our next Commander in Chief will take his words and his actions more responsibly, whether it is refraining from glorifying the use of pot, or whether it is living up to the standards of a Presidency that we can respect.

These "cheaters" probably did it throughout high school and college and have continued on since it has served them well. It DOES beat studying, if you have no morals.