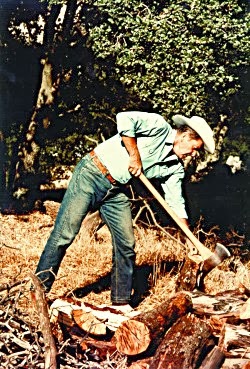 I would guess that most Americans under the age of fifty only know Ronald Reagan by reputation.  They may have heard from seniors of the wildly prosperous Reagan years, or perhaps have read in a fair and balanced history book of Reagan's winning the cold war against the Soviets.  But, I wonder how many know just how much trepidation there was about Reagan's age.

Ronald Reagan was 70 years old when he assumed the Presidency.  We all knew that..and many were fearful that the rigors of the job were simply too much for a man of his age.  After all, Eisenhower had his first heart attack only two years into his Presidency, and Lyndon Johnson croaked from heart disease very shortly after leaving the White House.  So there was legitimate concern that Reagan would be too old to carry out the exhausting duties of the Presidency.

Fortunately, for America, the vote that year was "anyone but Jimmy Carter" and Reagan won the White House.  And our fears began to ease when we saw Ronald Reagan stringing fence wire, or riding horses and chopping firewood all day at his ranch out in California during those Presidential retreats.

We saw his resiliency again when Reagan took a bullet scan millimeters from his heart, then refused a hospital gurney and walked his way to surgery.  Before he was put under he raised his head, looked up at the doctors and said "I hope at least some of you are Republicans."

Barack Obama is a much younger man...he gets his exercise on golf clubs around the country and shooting hoops with pro basketball players.  I'll leave it up to you to decide what's more strenuous, cutting a cord of firewood with an axe...or playing golf with Tiger Woods.

And when Ronald Reagan came up for re-election he won 49 of the 50 states in a landslide election, proof that one can win by living up to his principles.   And no one gave a damn that he was 74 years old.

One tough hombre!  And boy could we use him now.
Posted by A Modest Scribler at 2:00 AM

AND, he raised taxes SIX times!

I was 18 and able to vote in 1984 and proud to say I voted for Reagan.Also within an hour of his first inauguration Iran released the hostages, they knew Ronnie was not some pussy liberal, but a man of his word and action.Very sad todays' youth have no idea of who he truly was: a great man.

I agree with everything you said!
AND he raised taxes six times!
He knew that raising taxes would not hurt the economy and he was right!
He was great and not afraid of the righteous conservatives.

You needed to be more specific, Jerry...like I said, there was a lot more to Reagan's programs than tax hikes...and the last Dem President I know that bought into tax cuts to spur the economy was JFK.

Jerry's back, I thought he took his ball and went home months ago.