Illegals Are Killing Your Children 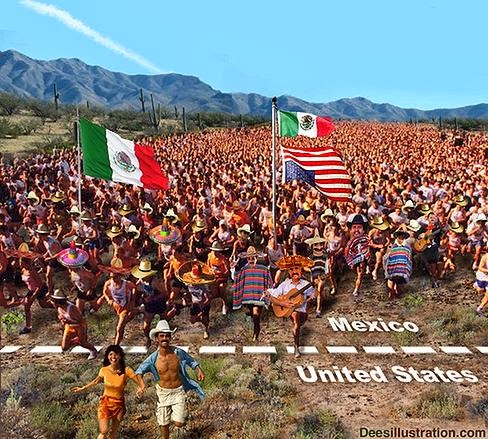 This morning we learned that sixteen kids at a high school in Henderson, Nevada have been diagnosed with Tuberculosis.  Health officials expect that number to climb higher.  This high school in southern Nevada is peopled heavily with illegal Mexican kids whom the Supreme Court has mandated that we educate.  However, the Supremes didn't tell us how to deal with a host of diseases that illegals have brought back to America after years of being under control or wiped out altogether.

As the massive invasion takes our country further down the road to third world status we must expect to deal with sick and dying children, victims of a government that simply places potential Democratic voters above the health of its citizens.

Nevada is not alone.  California, Texas, New Mexico and Arizona have long struggled with the alarming decline in public health.  Tuberculosis rates in these border states are now ten times the rate of the rest of the United States and are quickly exploding to epidemic proportions, 16,000 reported in Texas alone!   Lest the rest of America feel safe, you should know that Atlanta is now reporting outbreaks of Tuberculosis not seen for 60 years, the disease emanating from the explosive rise in illegal immigrants residing in that city.  And cities across America have reason for concern as illegals have now fanned out to all other states.

Just a couple of years ago California health officials were shocked to see a dramatic rise in Polio cases, once considered extinct in the Western world.  The rise in Hepatitus cases is the highest in our history, corresponding with rates that exist in other third world countries.

Perhaps most frightening has been the introduction of diseases once thought to no longer exist in America; Dengue Fever and Typhoid cases are now being reported.  Chagas, a disease not known in this country is now being reported.  This ugly disease is caused by parasites brought to this country that work their way under the skin, most often the face, then migrates to the brain where it brings cell destruction and death.

The problem of course is that we are absorbing Mexico's dregs; folks who have never been vaccinated against disease and carrying diseases into our country that have been extinct for 60 years or more.

What you normally hear in the arguments about illegal immigration are such things as the burden placed on our welfare system, or the increasing and heinous illegal crime rates, or ID theft.  Rarely does one hear the perils illegal immigration is causing to our public health.

Kinda makes you wonder:  will those open borders/amnesty folks feel the same way about awarding citizenship to illegal Mexicans when their kids develop TB or Polio or, heaven forbid, Typhoid?

How about dropping vaccine laced bottles of water,candy,whatever at the southern border, drive by vaccinations with dart guns at laborer gathering spots.Am I the only one that thinks it very odd that liberal politicians consider The Tea Party, and some religious groups "Domestic Terrorists" but the disease carrying illegals are not labeled Terrorists?Liberals stupid,damned stupid.

When a child enrolls in a new school doesn't that school require vaccination records?

Anon, that's a good question. I do know that some do, although I doubt that some of these diseases have vaccinations…and with the ease that illegals get very realistic driver's licenses and social security cards, how hard is to produce a fake vaccination record?

And of course, there are other dynamics, bringing new children from Mexico into the home and have the disease carried on to school by other kids, or sick children who have not yet become school age…just don't know how it all comes about.