My Two Dogs Are Liberals 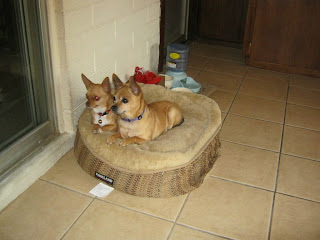 I own two Chihuahuas.  Or should I say they own me.  The tragedy here is that they have both proven to be liberals.

I see it every day.  If I'm having a meal they ignore their dish and covet mine.  If I give each of them one of those little rawhide chews they will fight like devils to get the one the other one is chewing on.  It does not matter the size of the chew, it's the "other one" that they desire.

The same is true for spare rib bones.  It is their very favorite, yet as they greedily suck the marrow out of their own personal bone they are constantly eyeing the bone the other one has.  They play desperate games with each other, where they will try to distract the other dog by going to the window and barking at an imaginary bird, or home intruder, just to get the other one to "bite" by deserting their bone  for a moment, just long enough for the other one to snatch the favored bone away.

When I give one of them affection, the other one will immediately leap in my lap and jam their head in front for the coveted pat on the head or stroke behind the ears.  I have had to perform "two handed petting" hundreds of times so that both of them are given equal due; failing to do so will result in hurt feelings.

Having been born and bred from an Hispanic culture, I suspect my Chihuahuas are likewise benignly in favor of Open Borders, or Amnesty or even ID theft.

My Chi's do not like making any kind of effort on their own.  They refuse to do tricks; if I ask them to sit, or roll over, or stay, they look at me as if I'm insane to expect anything from them.  They believe that anything I give them is their "due" for some past transgression I may have been guilty of in some past era.

HAHAHAHAHAHAA :) My St. Bernard, Vladimir, is a republican, will hold the door open for my Pug and Boston Terrier (who are liberals) He is trying to lead by example. So far that hasn't worked - go figure - now they expect him to give him most of his food!

Hey stout...at least you have one Republican dog to give comfort. ;)

yeah, you're right Craig..they own us.

in regards to "Having been born and bred from an Hispanic culture, I suspect my Chihuahuas are likewise benignly in favor of Open Borders, or Amnesty or even ID theft. "
there is a missing word or words somewhere in there.
what about.. "like some Hispanics"
maybe themissing word is SOME or a LOT will also do.. not to clarify that, sort of implies ALL.

Welll My friend, this is your friend, the retired Hispanic Officer. Who cannot agree MORE with you as far as illegal migration and the culture of entitlements. I am against illegals, law breakers who think the goverment owe them. Against those who seek all for nothing. who rather sit and collect.

Thanks for setting me straight, anon. You are of course right...there are many Hispanic citizens who frown on illegal immigration.