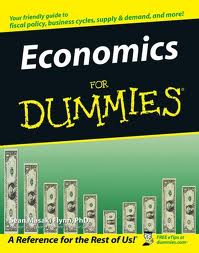 President Obama graduated from Harvard Law School.  He's surely an expert on Government Law.  How else could he have managed to circumvent the Constitution by using Executive Privelege to cover his mistakes, appoint 40 plus "Czars" to by pass Congress and issue "edicts" on laws he will impose and those he opts not to enforce.

However, I'm pretty sure Harvard Business School has eliminated Economics as prerequisites for a law degree.  That's the only explanation I can find for Obama's bizarre economic policies.

I'm more than willing to pull my Paul Samuelson Econ 101 textbook down from the shelf and help the Big O out a little here.  To make the lesson more palatable, I'll present a couple of lessons in mode of "Case Study" as Obama was accustomed to at Harvard.

Fred and Ethyl are a retired couple.  Fred was a foreman in a steel mill and Ethyl is a retired school teacher.  During their respective careers Fred and Ethyl worked hard at their jobs, lived frugally, paid their state and federal taxes and still managed to build a nest egg.

As Fred and Ethyl built their nest egg they put investment money into stocks and mutual funds.  Fred and Ethyl, unlike a state and government employee, must look after their retirement themselves.  Thus, Fred and Ethyl put their money "at risk".  They hope to see their nest egg grow in this risk environment.  Until President Obama came along the federal government recognized that putting money "at risk" deserves a tax break; a lower tax rate than salary because salary is not an "at risk" proposition.  This "tax break" has proven to be beneficial to both the "saver" as well as the government since this "at risk" money is used to fund business start-ups and business expansion as well as contributing to the creation of millions of jobs.  When President Reagan lowered the tax on capital gains and dividends the government benefited by the government getting double the amount of revenue because the economy expanded.

Fred and Ethyl have now read that President Obama wants to raise taxes on their nest egg (a nest egg accrued after state and federal taxes have already been paid in full).  Fred and Ethyl sit down over coffee and say "why should we put our nest egg at risk if we are going to be paying higher taxes, taxes that are much closer to the Joe who's paying "ordinary income" rates with none of his money "at risk".

Fred and Ethyl, no longer confident that their nest egg will grow, have decided they will cut back on their personal spending.    All the millions of Fred and Ethyls pull back from investing and pull back on spending and the American economy sinks like a stone.

The government then has to spend more for welfare and unemployment and food stamps, all the while receiving less revenue because Fred and Ethyl just told Obama to go to hell....which is where our economy has been going.

Note to Readers:  If you believe this blog serves a purpose, if you believe it lends a bit of rational sanity to some of the national insanity, I urge you to sign up as a follower and subscribe to it by email, in the "subscribe to" box on this page.  If I do not see an increase in interested subscribers I will end this blog sometime in the coming months.  Thanks.

And then along came the Mertze's new neighbor Ricki Ricardo and his lovely wife Lucy. Ricki an illegal alien from Cuba shows the Mertze's the benefits of the underground economy found in the entertainment industry and encourages their investment in a new Miami Beach nightclub empoying over fifty other illegal aliens. The beat goes on....

Ken, you've got a lot of "splainin" to do. First, Ricky was "legal" having won sponsorship from MGM Studios who hired him as a "contract player" in the 40's. (The wildest role Desi had was playing a Ivy League college student, hanging around the dorm and ogling the college girls!)

And Fred Mertz was so cheap I doubt he ever had to report any capital gains. As I remember he wouldn't even fix the building's furnace in the middle of winter....and he wasn't above raising Ricky and Lucy's rent from time to time.

The Mertz's weren't doing that well, as evidenced by Ethyl having to join Lucy in that job at the candy factory!

No room to compromise? How about keep capital gains low, or even lower it, for the first million bucks per year, and then raise it a bit?

Keep the capital gains tax low and put a 45% tax on money orders and any other method illegals use to send money out of the USA.

I like Jerry and Craig's suggestion! Both sound reasonable to me.