Crying Out For Freedom 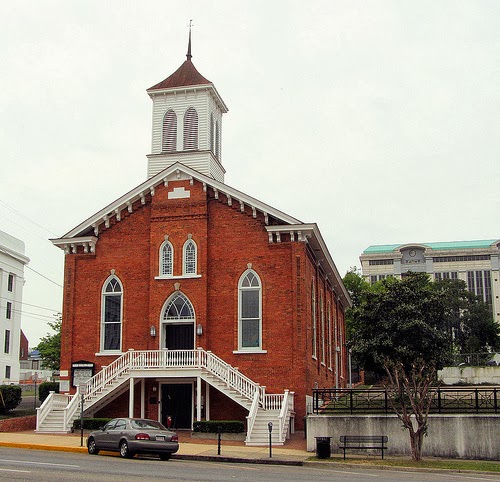 A few hundred Blacks were crowded into the church that evening.  The Dexter Avenue Baptist Church could accommodate no more so they rigged up loudspeakers outside so that the 10,000 Blacks gathered outside could hear what the young preacher would say.

Only days before Rosa Parks had refused to surrender her seat to a White passenger.  A fiery E.D. Nixon would secure her bail and, once again, attempt to rally the 40,000 Montgomery Blacks to boycott the buses until Blacks were treated fairly, and with respect.   The 90 Black Baptist ministers had gathered to try again to take some form of protest against this blatant and cruel racism.  When the great majority of ministers asked that the meetings be held in secret, in an effort to shield them from a White backlash, a young 26 year old minister stood up and said "why be so cowardly?"  "If WE are not brave enough to stand for our brethren, how can we expect them to stand against these wrongs?"

This congregation of ministers were shamed, for they knew he was right.  And they also knew they had found the man who would lead them on their long road to freedom.

And so, on this historic night, a 26 year old Martin Luther King, minister at the Dexter Avenue Baptist Church, a son of a crusading minister up in Atlanta, would speak the words that melded a great and grand coalition of freedom fighters.

And so, days later, as the few hundred in the church, and the ten thousand outside, began to listen they heard words that heartened them, strengthened them, steeled them for the hard times they knew would surely come.

He started out by clarifying the difference between they and their White opponents.  While Whites were threatening violence to stop Black social and political progress in the South,  Blacks would not.  "Now let us say that we are not here advocating violence.  We have overcome that.  I want it to be known throughout Montgomery and throughout the nation that we are a Christian people.  The only weapon that we have in our hands this evening is the weapon of protest."

With that opening stanza, the ten thousand stirred for they knew the truth in their own hearts.  The police came and thought about tearing down those outside speakers…the power of words was stirring thousands of souls.  But when they looked at the multitudes they backed away.

"And we are determined here in Montgomery to work and fight until justice runs down like water..and righteousness like a mighty stream."

And so, the buses, whose business was 75% Black, began bleeding red.  Carpools formed and pick up stations were established to get them to their factory job, or to the farm, or to their domestic work in White households.  Many others walked miles to work, or to the grocery store.

Later would come the fire hoses and the attack dogs..but the cry for freedom could not be silenced.  And the gentle words from that 26 year old Baptist preacher would echo truth throughout the South…and when attacked he would turn the other cheek and demand only peaceful protest.

And, sadly, the demons within the heart of a White bigot, for demons despise love and peace,  would at
last silence the voice that had inspired millions, both Black and White, to march the mean streets of hate and of prejudice.

Also, sadly, there are millions of Americans today who have forgotten the man's legacy; the quest for freedom and equality, God-given rights that no man has the right to deny.  And the great man would be sad today to hear of his own people's reverse prejudice and four decades of sloth and criminality, of rich Black entertainers who rode to the heights thanks to his efforts, but live in luxury and ignore the poverty of their own people…people who only know that there's a street named for him, that have never heard his "I have a dream speech" or his brilliant "Letter From A Birmingham Jail".

And now, what was once a cry for freedom, is just a cry that so much of his message has been lost to the ages.
Posted by A Modest Scribler at 2:00 AM

This is just my opinion on the reason Dr. King's true message is being eliminated:public education(liberal indoctrination) slants everything away from responsibility to dependency.Thanks for the thought provoking piece. Have a good day.