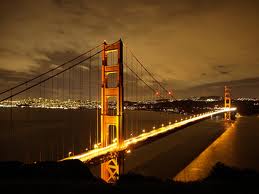 The earliest writings I've read about San Francisco was from the diary of a 16th century priest who traversed California south to north in the company of Spanish soldiers.  Upon climbing the rise of a hill he looked down, gazed upon San Francisco Bay and had his breath taken away by its natural beauty.

I first saw San Francisco in 1961.  We drove up to see a Giants-Cubs game in old Candlestick Park.  The summer sun tried mightily to burn off the fog that afternoon as I watched Willie M. and Willie M. drive baseballs over the left and right field fences.  San Francisco was still a brawny, brawling town back then, broad shouldered and toughened by seaman and dock workers and union organizers.  Herb Caen's column told us what was happening on her both gentle and mean streets.  The great lady survived earthquake and fire and emerged even stronger.  Rod Mckuen would romanticize the Great Lady with lovely odes to Stanyan Street and Sausalito and love in a lovely place.

The next time I visited the great city on the hill was in 1967, the "summer of love".  A few hundred thousand young people descended on San Francisco and camped out around Haight Ashbury.  They brought their drugs with them and squatted in the park and listened to The Dead and Jefferson Airplane and Moby Grape, Big Brother and Canned Heat, and Janis, all before they went "Hollywood".  The Hippies would stay, vegetating for another decade in a drug induced euphoria and feeding off the dregs of "the straights".

Later would come the gay, then subculture, drawn by the permissiveness of hippiedom and progressivism.  All manner of perversion was championed and the modern day Gomorrah still thrives, intravenously feeding off the beauty of the grand city.  Even today, if you rise early enough, you can climb a near vertical street, find a hash house for a coffee, then stand and look out on the lovely bay.  Or you can score a baguette and java in Ghiradelli Square and watch the early morning fisherman setting out for the day's catch.

But the Grand Dame is no more.  Her beauty fades in mid morning as old hippies and street urchins emerge from the hovels of card board boxes, from the sidewalks and from the parks and begin their day accosting and begging for "spare change".  It is a city where you're free to light up a joint but will be persecuted and fined if you dare put a Marlboro between your lips.  It is a city peopled with pale and willowy figures who quake at the thought of ingesting a Big Mac and legislate that Happy Meals are evil.

The Grand Dame is now a sanctuary for an illegal Mexican sub class that revels in peddling drugs, stealing citizen I.D., hit and run drivers, home invasions, stealing Beamers and luxuriating in a "cash only", "tax free" underground economy.

San Francisco was once a lovely, lovely lady.  She once captured the hearts of sailors and soldiers bound for Tarawa or Okinawa or Manila.  She entranced the world traveller who marveled at her natural beauty and the gentle hospitality of her people.  The lady now is just an old street whore, her cheeks rouged to disguise the cracks and lines of past indiscretions and the grand bloatings from so long partaking of "the golden calf".

The once Grand Lady will live on a bit longer, feeding off her once grand legacy...but she stands on shaky ground, no longer supported by the blue collar dock worker, no longer riding upon the broad shoulders of those who worked the fishing nets.   She now lives on in ill repute, is beginning to smell just a bit as those around her embrace a cradle to grave socialism that promises to destroy them.

I was born in 1958 in this great city. And I have seen it all. You hit the nail on the head. Especially about the illegal people. They have ruined this great city, along with our so called leaders.

Anon, thanks for visiting, and taking the time to comment.

Not long ago I read a profile of Nancy Pelosi, written by her. She is apparently so militantly liberal and left wing that, in the 70's, when contemplating the purchase of a home that she and her husband both admired, refused to buy the home because it had once been owned by a Republican who had served on Nixon's election campaign.

Sadly, she's not the only liberal nut job; you have thousands of them running city, county and state government. Thus, the "brownshirt" legislation that always seems to punish law abiding tax payers and reward those who are lazy and slothful.

I came to this town in the mid-sixties, I wild-eyed idealist courting the Turn On, Tune In and Drop Out sub-culture.

It was fun while it lasted. However, I stayed and courted the opposite side just as enthusiastically.

I still love San Francisco. I don't own a snow shovel or an air conditioner.

Yes, the extreme liberals have ruined the greatness that once was.

Sfj, yeah, I was 18 when I visited during the Sumer of Love; everything was cool for an eighteen year old that is enamored by free love and protesting the oldsters, but, like you, I grew up. I started raising a family, paying taxes, and monitoring those who I was supporting with my taxes...and not liking it one bit. San Francisco and other California liberals seemed to never have grown up.

I can attest to this. My dad was in the navy during the eighties and said San Francisco was one of the most beautiful cities on Earth. He took our family there last year and I really liked the Palace of Fine Arts. He was sad that it had become overrun with homeless though and said if he were mayor he'd just round them all up into shelters.

Thanks for sharing, David.

Having lived here all my life alot of first took place in SF. Can't talk about some of those here, but can assure you they were all beautiful memories. I am so sad to see it today. My old mother came back from a day trip to report that naked men came into a restaurant they went to. The Mission district, once a great place is just the shits, run over with bums and illegals all looking at you with threatening glares. I just hate the leadership in this state. I see it is now the third least free state in the nation and probably the first most undesirable by real Americans. Good bye San Fran and See Ya Kali. My home sent to the shit pile thank you democrat party.