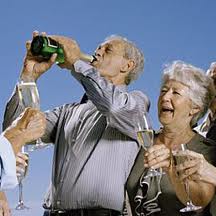 I've been writing for two years about my concerns of Barack Obama and the Democrats' excessive government spending and the accrual of a huge $16 trillion dollar national debt.  Every day I read of some new expensive government program going in effect to cater to those who might support Barack and the Dems come election time.  I've seen the majority of Americans now embracing a government dependent mentality and gearing up to give Obama another four years.

When I criticize the government's aiding and abetting illegal immigration by ignoring our immigration laws and granting benefits to illegals I am called a racist.  After all, even the few Americans that know we mailed out $11 billion dollars in Child Tax Credits to illegals filing W7/INIT tax returns seem to have little concern about it!   When I complain about waste, fraud and abuse in our welfare and medicare programs I've been called heartless.

When I write of my fears of big government tentacles invading every facet of our personal lives I've been called a Tea Bagger.

Lately, I've been digging deeper into the demographics of the polls and find that about two thirds of those 18-29 are planning on voting for Obama.  That graphic has sent me to thinking deeper about this. If America's youth has no problem with running up a huge bill for those young folks to pay at later date, if they are willing to pay taxes to fund the interest on that trillion dollars of treasuries owned by China, why the hell should I care anymore?

I'm 64 years old.  Given my current health I probably have five or six years left, if that.  So, if our young people are not worried about America's future, if they're willing to give Obama a green light for at least four more years of annual trillion dollar deficits, why am I wasting my time worrying about it either?  If my grandchildren are too stupid to know the hazards of these free-spending policies, or if they don't care, hey, let's all have a big party and celebrate!

In keeping with that philosophy I may just adopt that same economic policy in my personal life.  Right now I have very little debt and my house still has a tiny bit of equity in it.  But, to maintain my sound financial status, I've had to live pretty tightly over the last several years.  I clip food coupons and turn my thermostat up in the summer, fore go vacations, buy generic brands, clean my own house, do my own yard work and fix what I can myself.  Why in hell am I doing this?

Here's what I'm thinking about.  I think I'm going to open a joint credit card account with my grand children's name on it as well.  With that credit card I think I'll go out and buy some expensive art deco furniture.  My 60's era house could use remodeling too.  Perhaps I can install Rosewood kitchen cabinets and have an "all stainless" kitchen put in.  When the house is done I think I'll book a cruise to Hawaii and charge it to my grandchild's credit card.  Instead of hamburger why the hell am I not eating filet mignon and drinking Krug champagne?   I'm even thinking of using that card and buying season tickets to the Cardinals and Diamondback games.  I wonder if there are any luxury box seats available.

Yes, I can live like a king and enjoy the last few years of my life....then let those credit card folks come after my grandchildren!  What the hell!  How is that any different than what Obama is doing?

When you give a one-sided opinion by directing all that is wrong with this country towards Obama, it makes you appear intellectually feeble. You slam liberals, then act just the same as you claim that they do...just with a different agenda. By not addressing ANYTHING that came before Obama's administration for the past 8-12 years, you are ignoring critical economic facts. I don't support everything that Obama has done any more than I support Bush for the damage that he inflicted upon the country. I do see both sides, though. That's something that you refuse to do in your blogs.

I agree with your plan, though. Forget about politics and don't try to make sense out of this world today. Have a cocktail, write some children's stories and take regular naps. It'll all be over soon.

And you are guilty of shallow analysis. Don't criticize conservatives? Do a search on my blog and read "Bush, the Democrat's best friend". There are many others.

Also, you're guilty of chronic snark...which pretty much negates any potential for honest discussion.

Only two thirds? Thank God! I can happily say I am in the one third of that group. It doesn't help that we have an overwhelmingly liberal educational system from kindergarten all the way through college.

Good for you, David. Yes the educational system gets them early and indoctrinates most of them. Did you happen to read the news the other day about the college prof passing around a petition in class with the pledge to vote for Obama? Talks about grade pressure!