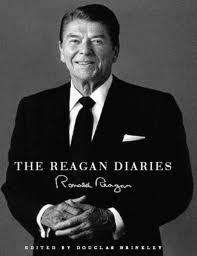 Last night I went on Amazon, bought and downloaded The Reagan Diaries to my Kindle E-Reader.  I started reading and literally couldn't put it down.  Doug Brinkley, a liberal historian, edited the diaries and even he was full of praise for this compilation of event documentation during Ronald Reagan's presidency.  Brinkley says only four Presidents have ever been so faithful in recording the daily experiences of their time in the White House.  The thoroughness of Reagan's writings prove to be the real worth one finds with the diaries.  Not only do you get a real sense of Reagan's humanity, but you are a witness to history; the Beirut bombings, tensions in the Middle East, the restoration of a military posture that brought down the Soviet Union, the Nuclear Agreements with the USSR, the budget and tax cuts that created 30 million jobs, reduced inflation from 20 percent a year to 4 percent a year and spurred the creation of Home Depot, Walmart, Microsoft, Cisco, Apple and dozens of other companies.

Before I offer my own comments about the diaries I have to readily admit I've always been a great admirer of Reagan and his legacy.  As one often remembers historically important moments, I can still remember the day Reagan was elected.  I was still in the Air Force, an Air Force that had half of its aircraft fleet grounded due to lack of spare parts.  President Carter, in a bizarre move to reduce defense costs, had vetoed an 800 million dollar spare parts purchase.  Our jet mechanics were working twelve hour days cannibalizing parts from downed aircraft just to keep half of our fleet in the air.  This made no sense to Air Force troops on the front line since we spent far more than the costs of parts acquisitions just to maintain minimum levels of mission readiness.  Within a month of Reagan's election he approved those parts purchases and brought Air Force mission readiness to the highest levels we had experienced in four years.  More importantly, rather than ignoring our military, Reagan again glorified military service.   Most folks don't know it, but it was Reagan who restored the tradition of returning military salutes as he descended the stairs of Air Force One.  Carter felt no need to do so.

One of the most striking things one sees when reading the diaries is the political climate that Reagan created just through force of his character and personality.  It seems incredible in today's warring political climate that Reagan was able to garner support from so many Democrats in the House and Senate.  The first indication that something remarkable was happening with Reagan was his ability to win over so many Democrats in that first Presidential Election.  Even more remarkable was the support Reagan got from labor unions, Independents and traditional Democratic voters.

Once elected, Reagan writes in his diaries that he was bound and determined to work with Democrats as much as possible.  And he was successful.  His diaries record his grand friendship, and political battles with Democratic House Speaker Tip O'Neil.  President Obama may wish to read these diaries.  Unlike Obama, who rarely deigned to meet with Congress on both sides of the aisle, Reagan hosted his Democratic opponents in the White House almost on a daily basis, trying to reach consensus on legislation that might move our country forward.  When he wasn't having Congress to dinner, he was on the phone daily with Democrats and Republicans alike.

Not unlike today, Reagan had to battle those on the Far Right and those on the Far Left.  Many of his more conservative colleagues wanted no part of negotiating with the Soviet Union.  Yet, as Reagan writes in his diaries, he believed that face to face meetings with Soviet leaders were essential for finding the common ground of humanity with those leaders.  And Reagan was proven to be right; he was able to negotiate reductions in nuclear weapons, resolve world conflict, and by the end of his Presidency, witness the dissolution of the Soviet empire.

The diaries provide meaningful personal insights into Reagan, the man, as well.  He records his feelings and thoughts immediately after the assassination attempt and documents the events in the weeks and months of his recovery.  His words record his feelings about the great love of his life, Nancy.  Most remarkable, in all the daily diary entries during Reagan's eight years in the White House, one finds a man who loved his country deeply; he speaks of lumps in the throat and chills down the spine in moments of patriotic pride.  In one entry Reagan remarks how especially lovely is our National Anthem when it is played in some foreign land.

I would challenge all Democrats and all Republicans and all Independents who still claim the ability to read something with an objective eye to read these diaries.  You'll find yourself wistful for a time when a man and a country were fitted so well for their times.  You'll find yourself longing for a time when the  perpetual optimism and love of country that one President possessed in such quantities that he could embrace and win over his political opponents by sharing a personal experience, tell a funny joke, share an after work glass of scotch and humanize an otherwise contentious political relationship.  Reagan could never demonize his opponents because he recognized the essential good in every human being.

These diaries speak of a love affair between a President and America, and Americans.  In the quiet of evening in the Oval Office,  Reagan read the letters Americans sent him.  He wrote a child who complained about having to clean his room.  He personally called a Nevadan who accused an Irish Reagan of not knowing "The Shooting of Dan McGrew" and recited the entire poem over the phone.  He wrote personal checks to see a Social Security pensioner through the month, then called her and chided her for not cashing his check, instead framing it and hanging it on her wall.  He sent a second check to her and told her to please cash the second one.  He was chided by staff for sending hundreds of personal checks to tide someone over.

A warning to readers of the Reagan Diaries:  If you're a Democrat you just might find yourself admiring a Republican.  If you're a Republican you'll find yourself loving someone who can no longer reciprocate that love and admiration.  And if you're one of those Americans who despairs for the future of America, you'll long for someone like Ronald Reagan, with his abounding optimism, to come along and tell us things are going to be okay; that it's "morning in America" again.

Perpetuating the war machine during a rare period in our history when we weren't assaulting other countries in the name of freedom? That's what you remember Reagen for? Getting you parts for your aircraft? You make it sound like every one was frantic...like Barney Fife trying to find his bullet. I'm sure there were more Gin Rummy and Cribbage games going on than brainstorming about how you could get your next spare part. What a crock. We have done more damage to our own nation through our military actions than any bombs might effect. We are a hated country because of our military 'objectives' that have been disguised as fights for freedom and democracy or to stem the flow of Communism. You lifers took the bait and will forever think that you can literally shoot down anyone who doesn't think like John Wayne and wear a flag pin in their lapels. You're probably a gun nut as well. BANG BANG....We're all dead!

It's interesting to hear the gruel from those who didn't serve try to elevate their own standing by denigrating those who did choose to serve.
I will not waste a single word trying to explain the sacrifice one goes through in 22 years in the military. They would be wasted on you.

The very fact that you are free to sprout this gruel is owning to those who defended your right to do so.

You are one sad pitiful excuse for a human being.

To the guy who has used five different identities, all to just bash and fail to make any salient points. Sorry, this is not the forum. I've allowed some of your posts but you just continue to sing the same old song and can't make a salient point if your life depended on it.

Start your own blog, then send a link and I'll decide if it's worth reading.