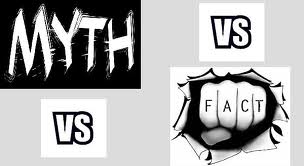 Myth:  Mitt Romney is a rich guy who doesn't relate to the working man and is somehow taking money from you.  The 1% are evil and if they were punished somehow your life would be better.

Fact:  Mitt Romney and the 1 percenters have never stuck their hand in your pocket and taken money out of your wallet.  Any connection you have had with a 1 percenter has been a mutual decision in the open market.  They did not force you to sign a mortgage agreement or compel you to buy an overvalued home you couldn't afford.  (Fanny Mae and Freddie Mac were ordered to give out questionable mortgages to folks who couldn't afford them, all because the House and Senate Banking Committee ordered them to.)

Fact:  The average unionized federal worker makes $125,000 dollars a year in pay and benefits, do not pay into Social Security and have a generous retirement program.  They take lush vacations to Las Vegas and Orlando and Miami and dine on $20.00 muffins and $5 dollar shrimp on your dime.  They take money out of your pocket by force.

Fact:  Unionized state workers make between $100,000 to $350,000 dollars per year in pay and benefits and are paid for by state income taxes you pay on your $45,000 dollar per year salary.  They have excellent medical benefits that you pay for while you may have no medical plan at all.  They take money out of your pocket by force.

Fact:  The government at city, state and federal levels have no interest in saving your tax dollars.  They do not care about fraud, waste and abuse and are only embarrassed when a story such as the GSA boondoggles are made public.  They take money from you by force.

Myth:  The government at all levels is there to serve the people and they are well aware, and grateful to you for their employment.

Fact:  I have never walked into a city, state, or federal government office and been welcomed.  The bureaucrat who is forced to deal with me seems bothered that he has to do so.  I stand in long lines at DMV, I am confronted by exasperated rudeness at city hall if I dare go there to retrieve a form or lodge a complaint.  The Social Security Office will greet you as if you are the plague.  If they deign to sign you up for your pension they act like it is their money they are giving away.  Please take the time to consider that fact:  How many times have you walked into a government office and had a $125,000 government worker treat you as well as the waitress at Chili's, who makes ten bucks an hour?

Myth:  Politicians lament the poor educational performance of our children and say more money is needed for schools and teachers.

Fact:  For every teacher in the Department of Education there are ten bureaucrats above he or her, who draw higher salaries than he or her, and have little to do with teaching our kids.

Myth:  Poor educational performance is caused by teachers having to teach to 20 kids in the classroom; the Department of Education says the ideal is a 15 to 1 ratio.

Fact:  The ratio in the 1960's was one teacher to 30 students and the 60's kids scored higher on every achievement test.

Myth:  Politicians, from the President on down, are making an honest effort to improve American education.

Fact:  You will never hear a Democratic politician blame the parents.  75% of all Black families are single parent households.  Blacks do most poorly in school = the two factors are never connected.  PTA participation in the 1960's was nearly unanimous; today very few parents participate.   You will never hear a Democratic politician demand the firing of bad teachers;  Democrats rely on the Teachers Unions to get re-elected.

Myth:  All teachers really care about making sure your kids are learning.

Fact:  Teacher's unions are willing to go on strike to insure their contracts do not hold them accountable for student performance.   Teachers will go on strike to make sure no one can fire bad teachers.

Myth:  We are not allocating enough money for education

Fact:  The United States pays out more money per student for their education than all other nations.  India and China, third world countries two decades ago, educate their children at one tenth the cost of the U.S. and their students are outperforming American kids by a wide margin.

Really? That $77,000 subsidy mittster the flipster got for his horse wasn't hand in my pocket?
Thanks goodnes!