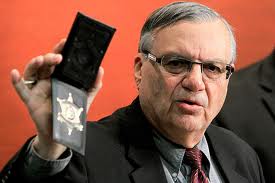 At 5PM Mountain Standard Time, 8PM Eastern time yesterday, a Friday before the Democratic National Convention, President Obama and his Attorney General Eric (Hate Whitey) Holder dropped the Hispanic Discrimination case against Arizona and Maricopa County's Sheriff Joe Arpao.  They tried to time the announcement so as to give themselves as little embarrassment as possible.

Sheriff Joe is guilty of one thing; enforcing the law.  The liberals across America hate him.  California transplants who now bring their liberal biases to Arizona hate and despise the guy.  The ultra liberal Gannett Corporation which owns the local Arizona Republic newspaper can't stand Joe.  For years The Republic has taken an Open Borders/Amnesty stance on illegal immigration.  That same paper will censor Hispanic crime news in a heartbeat if it furthers their Amnesty editorial stance.

Through it all, 79 year old Joe Arpao just keeps enforcing the law.  He's conducted crime sweeps throughout the county and when illegal Mexicans get caught in his web they are turned over for deportation to ICE.  Joe has also raided county businesses who hire illegals using fake or stolen ID, or businesses who intentionally hired illegals, ignoring our state's mandatory E-Verify laws.

There are others who hate Sheriff Joe.  For instance, parents who coddled and spoiled their kids and let them set off on a life of crime, hate Joe.  You see Sheriff Joe loves to save the taxpayer dollar.  Part of his county jail facility is comprised of big open tents without air conditioning.  Joe says if our troops in the Middle East can shoulder a 60 pound pack and work in 100 degree temperatures then his prisoners can certainly lay on a cot in a tent without the luxury of air conditioning.  He also dresses all his prisoners in pink underwear; this is to show them that being a thug does not make them tough.  Joe feeds each prisoner on a dollar day; he feeds them baloney sandwiches and openly brags that the Sheriff canines eat better than Maricopa county prisoners.  A few years ago Joe gave them Kool-Aid with their baloney sandwiches and when the prisoners complained about Kool Aid every day Joe took away the Kool-Aid and told them to drink water.  Joe believes that, if you make doing time in his facility uncomfortable, his prisoners will be just a little less likely to go out and commit another crime when they're released, at least in this county. It must be true because repeat offenders have often pleaded to more serious offenses and opted for state prison in lieu of ending up in Joe's tent city.

Unlike most jail and prison facilities Joe doesn't furnish gyms and big screen televisions for criminals.  Unlike most counties and states that spend an average of $43,000 a year to feed, medicate and incarcerate our criminal element, Joe believes a criminal should have plenty of time to contemplate his criminal past and should do so at as little cost to the taxpayer as possible.

Joe doesn't know what's going to happen now.  Although his name has been cleared, Obama's edict that ICE will no longer accept illegals for deportation from city, county or state law enforcement agencies, the Mexican criminal has a green light to continue running his drug cartel operations in America.  They can continue their human smuggling operations and they can continue to steal cars and have them over the border within two hours of lifting them.  Joe is in for some tough times since Obama and Holder have tied his hands in enforcing our immigration laws.  Even ICE agents are upset as they've been told to let any Mexican, of any age go, even if he's got a criminal record, just by uttering the words "I'm a Dreamer".

Yes, those who love to coddle criminals, those who champion illegal amnesty hate Sheriff Joe.  And yet, Joe has won every Maricopa County Sheriff's election for over 20 years.  And every election he wins 70 to 80% of our votes.  Barack Obama only wishes he had that kind of support.