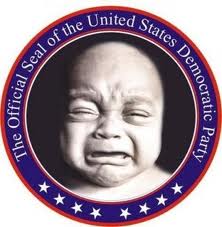 Oh my!  The liberals are bawling, throwing tantrums and stomping their feet over Mitt Romney's statement about the huge contingent of government tit-suckers.  How sad.  What's new?  You have wide swaths of America, government union workers, career welfare queens, food stamp armies, and in the last decade, millions of Mexican anchor babies firmly sucking on the government tit.  There are huge Black populations that declare themselves victims at birth, opt for a gang in lieu of school, and sit back and wait for Uncle Sugar to send them the goodies.  Can we ever forget that welfare mom with 17 kids that says America owes her?  Nine million Americans have somehow managed to get themselves declared disabled.  That 9 million figure is now four times the 50 year average.  What the hell are these people doing that is so dangerous that ends up quadrupling the Social Security disability rate?

Did Romney piss some of these people off?  Good!  Frankly, it's the first time I've heard a politician call out these tit-suckers for who they are!  Though he may be wrong on the percentages of "victims" there are certainly far too many of these folks who are just a huge drag on American society.  I have no problem with helping the aged and the truly disabled.  I also don't have a problem giving a year's worth of unemployment benefits to the jobless.... but liberals gave these people three years of a free ride on the gravy train!  WTF?

And guess what?  Mitt Romney is not going to lose a single vote over his remarks.  Again he was right!   The Obama tit suckers were never going to vote for him anyway, so, if he pissed you off, well, we really don't give a damn.  Romney may very well get more votes after his comments because productive America agrees with him!  Americans are damned sick and tired of a cradle to grave welfare life;  a life of government gimmies that we have to borrow from China to pay for.  When are the liberals going to learn that there just ain't no more money?

Hey, libs...psst..Obama can't deliver them either for very long.  We've had our debt rating lowered once already and the ratings agencies are getting ready to downgrade our debt once again if someone doesn't stop the runaway spending!  Yes, the Anointed One can whisper in your ear, say soothing words, but as much as he'd like to, he doesn't own the world's money supply.

Liberals, you heard the truth...and you didn't like it.  If you think that's painful just wait until that long, long gravy train comes to a screeching halt!  That's pain!