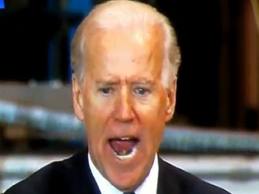 First of all, neither Joe nor The Anointed One had anything to do with capturing and killing Osama Bin Laden.  That was done by Seal Team Six as they travelled 10,000 miles and put their lives on the line while Barack and Joe were sipping latte's in the Situation Room.   Secondly, there's not a Commander in Chief (yes, even Jimmy Carter) that would not have given the "go" on the Bin Laden raid.  Nothing special there...so move along folks.   Okay, that's settled.

Secondly, there are no less than a cool million radical Islamists just sitting there in the Middle East waiting to fill Bin Laden's shoes.  Bush had it right; while it would have been nice to get Bin Laden, there's a huge army of radical Muslims who are willing to step in for the prize of those 99 virgins!  So, nice to get Bin Laden...but Obama didn't do it and neither did crazy Joe.

Thirdly, the only thing Obama did for General Motors was to violate contract law and award part of the company to the United Auto Workers Union who put tens of millions of dollars to get Obama elected.  Had contract law and finance laws been adhered to, GM, one of America's largest corporations, would have gone through an organized bankruptcy.  During that process U.S. Bankruptcy courts assess the corporations assets, defines their liabilities, then gives corporate governance to negotiate with their labor unions, their parts suppliers and their debt holders.  Nothing new here either; organized corporate bankruptcy happens every day in U.S. business.

Instead, the Anointed One saw his grand opportunity to impose a bit of socialism, while concurrently rewarding union labor for their money and their votes.  Obama stepped in and awarded a big hunk of the company to the unions and charged them not one single dime for that ownership.  Obama then told GM bondholders to get lost.

Sadly, because Obama intervened, GM has been operating marginally over the last three years.  The markets do not have confidence in GM and their stock price remains in the tank, so much so that, as the government has tried to sell shares they own, they have had to pull back from selling those shares at depressed prices.  Last week Obama's favorite toy electric car, the Chevy Volt, shut down production because Americans don't want the damn things.   As a result General Motors owes the American taxpayer $37 billion dollars with little prospect that it can be paid back.  In fact last week Treasury Secretary Timothy Geithner testified that taxpayers are destined to lose at least $30 billion dollars on this deal.  Note:  Look for that government GM stock sale right after the election because Obama won't tolerate having that $30 billion dollar loss in newspaper headlines as he's trying to score four more years.

Ya know all those major banks that Obama and Joe demonized?  They have all paid back their loans, with big interest, garnering huge returns for the government!

Well, I guess old Joe Biden will keep yelling "Osama's dead, GM's alive"....just as long as he can continue duping those ignorant enough to believe it.

I guess with regards to the killing of Bin Laden, you could say Obama didnt kill that