Vice And Sin; The Geritol Generation 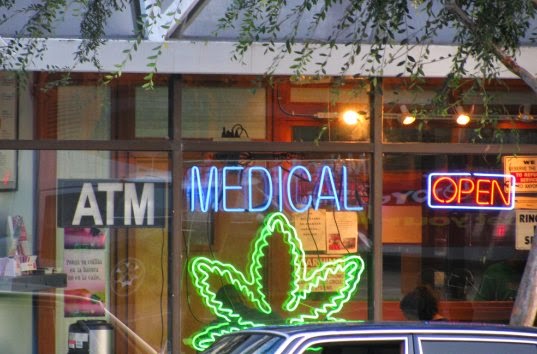 Last week the last hurdle was cleared so that Sun City, Arizona will get its first Medical Marijuana Dispensary.  Now aging baby boomers are flocking to their doctors, fully prepared to log complaints about back pain, insomnia and any other ailment that will win them the doctor's blessing for a Medical Marijuana card.

I'm not surprised at all; keep in mind, kiddies, that it was the boomers who popularized drugs to begin with; and finally, just months or years before they go "deep six" in some local graveyard, they can toke as often as they wish with complete impunity.

Now I'm not saying everyone's on board with this.  The weekly Sun City circular, usually replete with complaint letters about the local dog park, or their Medicare plan, were just chocked full of opinions about our local pot parlor.  Opinions on the issue seems to be divided equally between pro and con.
One group against the pot party is what I call the Ronald McDonald contingent.  Believe it or not we have a McDonald's here, frequented every single morning by the "blue and silver hair crowd" that seems to exist just to blow the mind of anyone under 30 who wanders into the place for a sausage biscuit.  As soon as you walk in you see no fewer than 50 old gizzards parked at every available table.  It is funny as hell; these old folks bring their own coffee mug and Micky D's is all too happy to fill it and slide a sausage and egg McMuffin across the counter.  The elders then slide into a booth and enjoy their "regulars" and will sit there all morning jawing about hemorrhoids and arthritis and the world going to hell.  But now they are talking about Sun City potheads and they don't like it one bit.

The "pro pot" crowd don't seem to have a meeting place; maybe they all stay home, happy and stoned to the gills.  But, apparently there are enough of the "pro" crowd to get the Medical Marijuana dispensary approved in our little senior burg.

I'm also not surprised because I've seen all manner of "victimless vice" showing up in our environs in the last decade.  Massage parlors abound, no doubt driven by all those aging aching backs seeking relief from a little pot and a little slap and tickle from the little Asian girl...but only when the little woman is out of town or out shopping with the girls.  Our massage parlor owners love it because they seem to always get busted in the younger parts of town, those sneaky cops posing as customers, then busting the establishment for all those "happy endings".  It's much safer for "happy endings" here in Sun City as few of the elderly locals could ever be mistaken for a cop.  So we have no less than a dozen massage parlors doing "booming business" with the aging boomers.

Hey, let me say right now that I'm for all the vice and sin this area can take.  A little pot and an occasional "slap and tickle" never hurt anyone.

I do have to end here by recounting something I heard when I first moved here.  I was told Sun City has its share of swingers; wife swapping in the golden years.  The story went that, whatever house was hosting a swinger's party, would put a pink flamingo out in the front yard to let folks know that an "Open House of the fleshly kind" was on for that particularly night.  Well kiddies, I'm a bit abashed to tell you that I may have driven for hours looking for those pink flamingos...just to see if the story was true.  Just call me an old nasty "voyeur"...(never found a single pink flamingo)...sigh.
Posted by A Modest Scribler at 2:00 AM

So THAT is what the Pink Flamingos are about! Heck with Arizona, Florida is the Spot!

Brian, you'll have to find your sin and vice elsewhere for fourteen more years, dude. :)

But Jerry, it's not as much fun in Florida cause the skeeters will eat you up when you're running around stark at one of those parties!

Go buy some pink flamingos put them on random lawns and watch the fun.All the medicinally stoned people getting naked in someones front yard or wondering why there are so many people knocking on their door partially clothed and hungry.

Craig, you are so devious...gotta watch out for you!

Sounds like the "Pink flamingo" rumor was spread by the Real Estate Agents to convince the "Old Geezers" to buy. Pretty good trick. This is just an example of the Freedoms our Forefathers envisioned when they fought the British. Could you just see Old George Washington naked chasing 60 year old ladies around? I think after the age of 60, you shouldn't have to obey any more laws. That's the prize you get for obeying them for so long. Sigh. Can only dream...

Frank, the real estate agent theory is entirely possible but , but the several folks who repeated it seemed to really know someone who were involved. And we've got like 90% here who vote Republican so pretty conservative (doesn't mean they don't play around but I would think a rumor like that would discourage as many as it sucked in.

And there really was a scandal here several years ago as some swinger "key club" got busted. Someone who was in that crowd wrote an expose book on it.