Even Jerry Would Take Up Arms 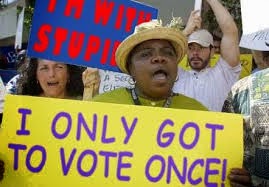 If I were to tell you that I'm going to take $54,000 dollars from you each and every year I'll bet you'd be damned angry.  In fact, you'd probably do anything to stop me from doing it.  Well, that's what the "47 per centers" are looking at as we near election day.  The deadbeats, the welfare queens, the Food Stamp gamers, all are in panic over the possibility that the Republicans might take control of the Senate and stop the gravy train before it even leaves the station, or at least leave a few box cars empty of goodies.

So the Democrats and all their many minions are doing everything they can to win this election, just as they did in 2012.  Sadly, they are using voting fraud to win the day.  Already this election season we found voting machines in Illinois automatically changing Republican votes over to the Democratic candidate.  In California we found election officials sending out mail in ballots with the Democratic candidate pre-marked.  In Georgia last week they discovered 1400 illegal Mexicans who had registered to vote.  When discovered election officials were unable to tell how many more illegal votes were already submitted by mail in ballots...or even if they can cull those illegal votes out of the system.  In Baltimore and Detroit our Democratic friends were filmed while going through trash dumpsters retrieving mail in ballots that had been trashed, then filling out the ballots in the Dems' favor.  In Ohio a Black woman was found to have voted for Obama seven times and Al Sharpton embraced her and laughingly gave her a free Obamaphone for her efforts to swing Ohio into the Democratic column.  And finally, Obama's Attorney General Eric Holder has been death on any state that might demand voter ID before casting a vote.

Have you forgotten, dear reader, how surprised we all were in 2012 when we woke up to find Obama had won the Presidential contest going away?  After all those polls that showed Mitt Romney either ahead, or in a dead heat?  Do you remember those Philadelphia voting districts that turned out Obama voters by 115%, and no one ever investigated how you could record more votes than eligible voters?

Today I just read a new item that says Democrats are mailing in more mail in ballots than Republicans, in some states with ratios as large as two to one!  Both John McCain and Rush Limbaugh have said they expect a low voter turnout.  Well, not for the Democrats...they are turning out in droves to protect that $54,000 dollars a year booty that they fear they might lose should Democrats lose the key to the gravy train!

It was Thomas Jefferson who warned that, when the citizenry gain the power to vote themselves benefits, they will do so and that will be the end of the American republic.  Well, that fear has been realized and it's bad enough.  But what if we discover, especially in close elections such as we had in Ohio and half a dozen other larger states in 2012, that it was voter fraud that swung the difference?

I'm willing to bet you that, if voter fraud ends up turning our elections, even our good liberally minded friend, Jerry would take up arms in a full blown 2nd Civil War.  If we can't trust the integrity of our elections, we are truly lost and there's no driving interest to any longer live under the rule of law.

Of course we could eradicate this fraud that is a cancer on the heart of America in a flash....we just need the 50% who sit on their asses and complain, and yet don't go out to vote, to do so.  Pulling a voting lever, checking to make sure the machine properly recorded your vote is a hell of a lot easier than taking up arms and manning a machine gun nest in downtown Los Angeles.

if there is a war, please Don't send me to Los Angeles! Yes, of course, I am 100% against all voter fraud, illegal ballots, double voting, and hanging chads! That use to be a serious crime!
It use to be a serious crime to steal mail! and "voting yourselves benefits"
is just plain nuts!
I will take our system with its errors over any other system but voters who interfere with democracy and break the law and vote illegally, really, should be shot!

Time worn tradition that a grunt complains about where HQ sends them..you'll take L.A. and like it! :)

After this was written I read that NYC funds a multimillion dollar election fraud fund. They recently conducted a sampling of voter fraud in NYC; found that 97% of ineligible voters were allowed to vote and have their vote counted....and no one was prosecuted...and still aren't.

It always seems that those that bitch the most do not vote.Why is it Kalifornia can give illegals drivers licences with a photo, yet cannot require a photo I.D. to vote.To anyone that does not vote STFU.

Amen, Craig...I rate those who don't vote lower than liberal Democrats....non voters are slothful scum underserving of living in this country.

wow, "lower than liberal democrats" is scraping the bottom of the barre"!

Sent in my ballot already and didn't see one Democrat on it, or maybe that word has been erased from my mind. If the Courts won't uphold voter ID checks, then we've lost our Liberty. Gee. It's so tough to get a picture ID. Such an inconvenience. Yeh, right. It don't get any stupider than that.

All the fraud that was discovered in the 2012 presidential election and now the 'malfunctioning' machines, yet NOTHING is ever done about it. NOTHING! Really does make me believe that there's going to be a straw that breaks the camel's back. In other words, a civil war!

I agree on picture ID, Frank. Most states will issue them for free. Just go to your local DMV office.

Nah, they don't want them cause then they'd have to show them!

True, Carol. If the Dems don't want to play fair, perhaps they'll be happy dodging bullets. Yes, as crazy as it sounded four years ago when I predicted it, it is becoming more and more likely that we'll have to settle things with war.

I'll buck the tide: Even if it was proven that massive voter fraud occurred, to the point that election results were altered: 1) Nothing would be done by the feds (After all, THEY'D be the ones in power), and 2) The majority of the population wouldn't care. Don't believe me? Look at the voting percentages - a minority of those eligible to vote actually bother to do so. Those that do, a growing majority vote Dim - and what party do all the vote fraud ballots support? Seriously, have you ever read a report indicating R's are the beneficiary of illegal voting? People might complain on websites like this, but what else would be done? Not much. Get used to it, and keep voting if you believe it will make a difference.

Yep, Don Quixote here, Randy...I'll keep swinging at wind mills and if I lose I keep my pride. And a revolution always starts with a small spark and can ignite into a great fire..or a great cause.

Don't matter how the vote comes out...I'm not crawling away and hiding my head in the sand.

If George Washington thought like you we'd all be eating kidney pie and haggis.