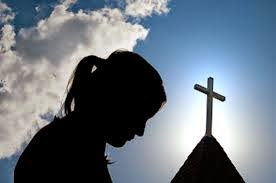 I've written time after time here that I'm not affiliated with an organized religion.  I do believe in God, our creator, and have also said I have great admiration for those who can make their religion work for them; serve as a community meeting place, help them to live better lives, and find solace and comfort from an established religion.

I try to look at my own place in my creator's world and try to live it the best I can.  I do not demonize those who follow a religion.  I do not demonize those who possess beliefs that are unpopular in today's society, as the liberal left do time and again.  We have all heard the old liberal saws; if you are opposed to abortion you hate women, if you oppose illegal immigration, you are racist, if you opposed gay marriage you are a "hater",  and you are equally racist if you oppose the policies of an African American President.

So, two pieces of news came out this past week that, to me, were illustrative of a great chasm we are experiencing these days between the religious and the secular.  First came news from the Huffington Post that reports a study conducted at one of our more prestigious eastern universities.  The study purports to show that atheists and the non-believing secular score two or three points higher on intelligence tests.  Okay.

Indeed, those of the secular are so smart that they believe any one who clings to a religion does so simply because the religious simply do not have the brainpower to understand that there is no God...that they are no better than superstitious neanderthals who require a mythical God to see them thorough their sorrows and many of life's challenges.

Well, Americans seems to have gotten smarter and smarter over the last five decades.  Regular church attendance 50 years ago exceeded 60% of the population and those who attended church on several weeks of the year pushed that figure to closer to 65%.  Further,  50 years ago nearly all said religion was important to their lives.  According to a December 2013 Gallup poll, far less than half of Americans now consider religion an important part of their lives and only little more than 40% attend church regularly today.

So, as I am chewing on all this over the weekend the secular Washington Post reported another survey they conducted.  They crunched the numbers and found that the vast majority of charity in this country comes from donors who are religious and belong to a church.  And, with the exception of Utah, the largest religious charity came from the poorest states; Alabama, Mississippi, and Louisiana.
In contrast, those who gave the least was the Northeast Seaboard, home to our most prestigious universities and most liberal citizens.

The Post poll also ran the numbers using IRS data.  They found that, during the last four years the rich have reduced their charitable giving by 4.6 percent while the poor, despite amazing financial challenges have stepped up their giving to offset the loss from the wealthy donors.

No doubt, Obama's big tax hike on the wealthy had something to do with this.  Those making more than $200,000 dollars a year, and paying higher taxes, seem to be saying, "hey, we actually contribute more to charity...the difference now being it flows to the government to be distributed as they see fit in order to buy voter loyalty."

No matter.  The real point I'm drawing from all of this is that these religious folks are so much dumber than secular liberals.  So dumb that they actually give away their OWN money..what a concept!

In my little community alone I see little old ladies from a church auxiliary go out and serve meals in homeless kitchens, serve as teacher's and library and hospital aides, for free.  None of that goes on an IRS tax deduction.  Churches here buy school bags and tablets and writing materials for school kids. One church runs a senior meals on wheels operation for elderly shut-ins and they don't get a dime from local, state or federal government to do it.  These ladies show up early every morning in the church kitchen and whip up meals and send their husbands out to deliver them.

Post Script:  Just had to add something that came out Monday in the liberal rag Slate Magazine.  One of their finest liberal writers, Brian Palmer, wrote an essay condemning all of these church groups who are sending missionaries with medical training to Africa in an effort to combat the Ebola virus.  Palmer says he looks with suspicion on these "do gooders" because, what they really want is to cure them, then preach to the survivors about religion.  Those dastardly Christians!

I don't disagree with you at all but am reminded of the reason our founding fathers wanted a separation of Church and State: we don't want a Caliphate like ISIL running this country! Also, I am reminded of picking pineapples in Hawaii in my youth and a saying they have there: the missionaries came to Hawaii to do good and stayed there to do well. Dole and Delmonte are the offspring of the missionaries.

Following palmers thought process of the religious wanting to cure the sick and then force feed them religion, why did odumdum send 3000 troops?Force feed them socialism,racism,homosexuality?The poor and conservatives generally donate more than the evil 1%, the oddball hollyweird 1%.Conservatives and the poor just are quiet about donations.If most people would take an objective look at the world issues, religions are a major cause as well as a shining beacon of hope.Side note I am a fully Ordained Dudeist Priest.Have a great weekend

Jerry, I really don't know what my essay today has to do with the church taking over the government. I am far more concerned that our public unions, city, state and federal, have taken over the government. They get in bed with politicians and work to keep them in office and keep the gravy coming...raking in 30% higher wages than those in the private sector and destroying the economies of nearly every major city and state in America...all the while thumbing their nose at the public and performing their respective services as inefficiently as possible. Dole has more than it's share of sins but Del Monte was not birthed by missionaries...they bought a cannery in Hawaii but had nothing to do with religious missionaries. And finally, liberals have taken the secular from a base of keeping church and state separate to warring on all religions that won't bow to the secular big government god.

Craig, I had to look up "dudiest priest" when you first posted that. :)

And yep, I'll take hanging around church folks over secular liberals any day of the week.

Jerry Carlin parrots a very common belief among those antagonistic to religion (it's not really against religion - it's opposition to the idea that God is superior to man and man has an obligation to follow God's laws. THAT is what they really despise), namely the "separation of church and state" means religions hold have no p[lace in our government. FLAT WRONG. The founders were not all Christians, but most were. That "separation of church and state" is a misread of a Supreme Court case holding. The founders intended that religion play a very large part in our government, namely by influencing he lives of our elected pols. They were determined that our government NOT interfere in the churches or the religious practices of the citizenry. That was the "wall between church and state": Keep government out of the churches, but keep the church's influence in our government. After seeing how man has completely screwed up, seems to me the wisdom and teachings of God is desperately needed, now more than ever.

Randy, I'm not sure what Jerry believes about God. He's a good man so he must have a lot of God in him. If I were to just take a wild ass guess (and that's not fair), I think Jerry is a moderate suffering from traces of liberalism. Keep in mind that he did spend years and years in education and some of that secular dogma has got to rub off on ya.
While I totally agree with you about the founders' original intent it should be noted that our greatest thinker, Thomas Jefferson, was at best wishy washy on the concept of a 'god'...most of his life he proposed that He didn't exist...then in his later years, when writing to John Adams upon the loss of Adams wife, Jefferson talked about seeing Abigail again in the next life. Perhaps he was hedging his bet as mortality approached.