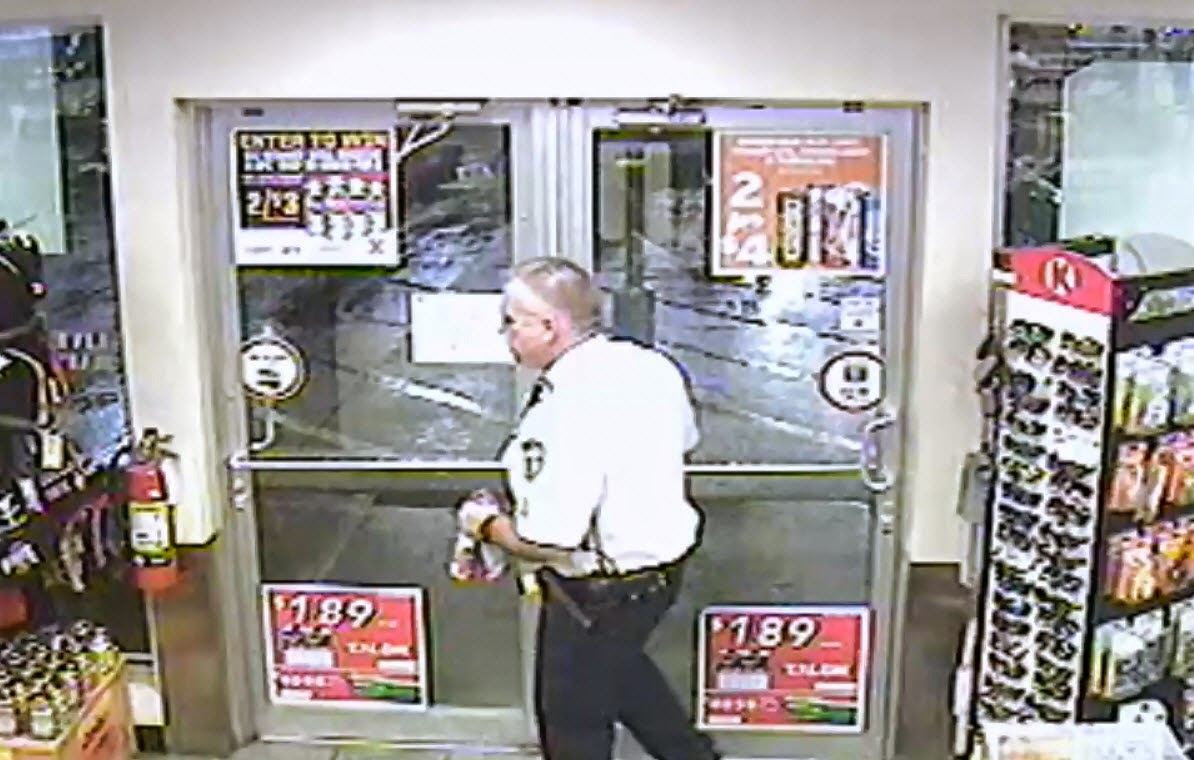 Friday brought news that a police sergeant over in Ohio was caught on camera stealing popcorn.  He apparently paid for one but can be seen on the security cameras carrying two out the door.  He has reportedly done this more than once.   Wish this were an isolated incident.  A couple of months ago one of our local cops here in Arizona was busted for stealing donuts.

Yes, I know these are minor crimes but it speaks to a much larger issue; what kind of cops, what twisting of morals are we allowing those who are sworn to uphold and enforce our laws?  How can our citizenry be expected to follow the law when everyone in authority, to include our own President, think themselves above those laws?  If this continues we can expect even greater societal turmoil and lawlessness.

And even these little minor infractions give credence to those creeps who would like nothing better than to see all laws ignored.  And it makes it so much easier for those thugs down in Ferguson to cry police brutality and be given some level of believability.  We see these few rotten cops and it becomes all to easy to paint them all with a broad brush.

Sadly, though this Ohio cop was suspended without pay, most of the time the Police give these minor miscreants a slap on the wrist, suspend them with pay for a time, then send them back on the street.  Bad policy.  Cops ought to be held to a higher standard than the average citizen, simply because of the responsibility they are charged with; enforcement of our laws.

The military is not without sin, but, per capita, I'll wager that military men and women follow an ethical and professional road much higher than the general populace.  That's because we were governed by the Uniform Code of Military Justice which is far tougher in meting our punishment for even non-criminal but ethical violations.  Try getting caught lying just once in a military academy and you're out on your ass.  If adultery is your game you don't want to be in the military...you get busted for that too.  And the military doesn't deal much in shades of gray; it's either black or white with little room to maneuver anywhere in between.

So, if the military can be held to higher standards why the hell not the police also?  My brother was a career cop, a damn fine one...managed to serve over three decades without relying on the power of his badge to tarnish his soul and advance his own well being.  Oh sure, he got half off a meal as soon as he entered a restaurant in uniform, his coffee was cheap, but he was raised not to lie, cheat, or steal by a good mother, so he didn't.

So let's cull out these sneak thief cops that think the law is only for the civilian.  At least, let's take away that nice salary for a year and let him come back on probation, if at all.  I'm a huge fan of those who serve and protect so let's remove the rotten apples and give the thugs no excuse at all for labeling the whole barrel as bad.

What an agreeable post! I would hate to be a cop, a pretty dangerous and unthankful job, but it does seem from time to time that they forget who they are working for. It has to be difficult to have a job that forces you to deal with the dregs of society and be surrounded by negativity all day, every day. That said, you are still right. When we see law breaking all over, from the President on down the line, it makes us think that "Right and Wrong" is a grey issue of not being caught. We need better than that.

Jerry, I imagine a cop on patrol, in Detroit, or Watts, or the south side of Chicago..patrolling that rat's nest five days a week, year after year, and I could better understand if some night the cop snapped and blew away a thug.

What I can't understand is a cop stealing donuts and popcorn simply because they think they are above the law.

Do not ever question a cop for they are above us.WRONG they need to be held responsible for their actions just like the rest of us. Law enforcement like any other profession or trade has the same types of scumbags, it would be nice to hear more about the good ones who are the majority of officers.

It is much harder than you might think to be a fair and impartial police officer. Years ago when I was a city police officer I sometimes wrestled with my conscience, trying to enforce the law evenly to everyone as I had sworn to do but I did so, sometimes to my detriment. I once gave my next door neighbor a traffic ticket. You can imagine how that turned out.

I felt badly for writing traffic tickets to a sweet elderly grandmother or to an obviously very poor family in an old car that may have to go without food or clothing they needed to pay the ticket.

Early on, I gave an off duty city fireman a speeding ticket. The next morning I was summoned to the Chief's office where he questioned my common sense.

Another time, the day after issuing a routine speeding ticket to a man, I received a notice to meet with the District Attorney at his office where he produced a copy of the ticket. He calmly advised me I had written a ticket to the husband of his private secretary and would consider it a personal favor if I would voided the ticket. I knew this was a very big deal. A fearful dread came over me. A lowly patrolman was about to defy the wishes of the County District Attorney, but my conscience over rode my common sense so I refused to tear up the citation. I was angrily dismissed without adieu.

A few weeks later in uniform, I was making a late night bar check near closing time where I saw two men squaring off to fight. I asked them to cool it and stepped between them hoping to defuse the situation. Without warning, one of the pugilist gave me a hard right, knocking me against the wall behind me. I literally bounced off the wall and quickly back into him and was able to land him face down on the floor in a choke hold until help arrived. Needless to say, we booked the guy for assault on a peace officer.

A few days later I was stunned to find out the District Attorney had dropped all charges against the man. When I complained to my commanding officer, he turned his head and walked away without comment. It was then clear my career was on a road to nowhere.

It was not all bad though. Sometimes as I approached a car with my ticket book in hand, I was pleasantly surprised to see a smiling pretty lady had pulled her dress up as far as she could. It always took a little longer to write those tickets but the nice view always disappeared by the time she had to give me her signature.

Appreciate your taking the time to comment, Jerry. Isn't it sickening that politics has to ooze its nasty into every facet of government. And the higher you are up the food chain, the more political it gets, as evidenced by your commander walking away from your complaint.

You're right; it is hard want to work in a world where right and wrong are only defined in shades of gray.

We've all had those moral dilemmas; they happen in all lines of work, perhaps not as critically defined as in law enforcement. At times when I have been faced with difficult decisions, I've tried like hell to make the small compromises, the ones I can live with...and stand firm on those that I deem not meriting violating your hard and fast principles....the ones that you cave on end up haunting you forever.

Again, thanks for giving your thoughts from someone who has served and protected.

"Cops ought to be held to a higher standard than the average citizen, simply because of the responsibility they are charged with; enforcement of our laws." Good luck selling that. The "first responders" are policed by their own, held to account for breaking the laws by DA's that rely on the testimony of the same agencies (and in some instances, the same officers) to make their cases, all the while society is being told life as we know it would end if not for the heroism/bravery/etc. of our "first responders". I don't dislike cops - they are necessary because we have bad guys in the world. That said, the "Thin Blue Line" rhetoric is getting old. When cops break the law ESPECIALLY in the line of duty - fire them, arrest them, and prosecute them to the fullest extent of the law.