World Going To The Dogs 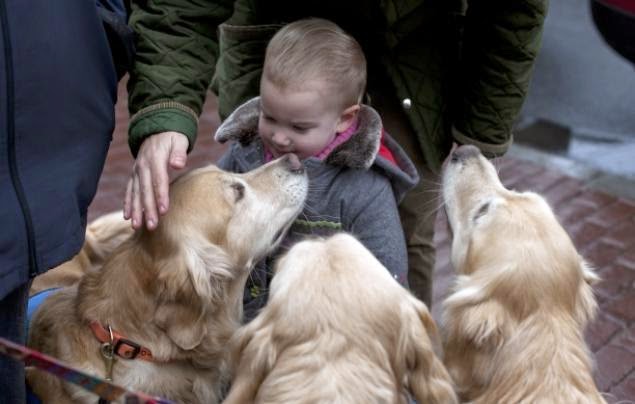 A few years ago the folks at a Lutheran Church up in Addison, Illinois took a look at all the tragedy happening all around us and decided to do something about it.  While the church itself can offer great comfort; feeding and sheltering the homeless, providing medical aid, and even helping folks hook up with local, state and government agencies for help, sometimes the victims of tragedy need something more...they need to feel that unconditional kindness and unconditional love still exists.

So the church formed an organization called Lutheran Church Charities and they recruited a small platoon of golden retrievers and their handlers, with the unit designation of K-9 Comfort Corp, and sent them out into America to give comfort where it was most needed.

So they sent the goldens to Sandy Hook where they could mingle with little kids who had seen the worst that man can do.  The doggies licked the faces of little school children, nudged their noses into little palms, took naps with their heads in their laps, and vice versa.  And helped those little kids remember that there is love in the world, even if it must come from a dog.

And that K-9 Comfort Corp have been in army hospitals, visiting our wounded troops, they've been in VA hospitals helping vets suffering from PTSD, they were there as the Colorado flood victims emerged from their ruined homes, they've been in emergency shelters in cities hard hit by tornadoes and natural disasters.  They were at the Boston Marathon to comfort victims of that tragedy and they've been in children's cancer wards.

So, today the LCC K-9 Comfort Corp is heading up to Marysville, Washington.  These furry comforters are going to mingle with high school kids mourning the loss of their friend, and their sense of safety and security...and their sense of innocence.  Those doggies are going to remind kids that, no matter how cruel humans can be, at least one of God's creatures is here to show mercy and compassion when it is needed the most.

Lutheran Church Charities can't begin to fund these canine missions of mercy.  So both God lovers and Dog lovers chip in to this worthiest of causes.  As a lover of both, I sent em five bucks today.  That five spot probably won't even get em to the airport but it's a start.  And there must be a hell of a lot of "five spot donors" cause this K-9 Corp has been to dozens of dozens of tragedies since their war on sorrow began a few years ago.

Peace and Mercy for all of you.

Thank you for this, the price of a latte and the effects will last longer. I will join your club and my 5 bucks is on its way.

That's cool, Jerry. They'll thank you, and I do now, my friend.

Dropping by the mail box on my way to work. Thanks.

Glad you feel like I do, Craig. Doggie aid is a pretty good cause.

Thank you Dearel for affording us an opportunity help ease the mental anguish these kids are experiencing. The psyches of these children will forever be damaged because someone they respected and admired betrayed their trust in the most heinous way possible.

Way to go, cousin. Sometimes it's the little things that mean so much and little doggies can sometime save the day...or make it just a bit easier.

Brought tears to my eyes. Consider it done.

Good for you, Jilly. Feels good, doesn't it?...even if it's just a five spot.