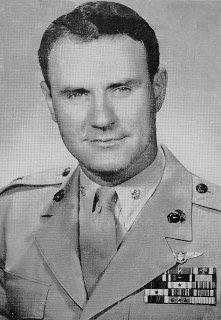 On the afternoon of 26 July, 1959, Lieutenant Colonel Bill Rankin, a veteran Marine pilot from World War II and the Korean Conflict, motored onto the flight line on Naval Air Station, South Weymouth, Massachusetts.  He climbed into the cockpit of his Vought F-8 Crusader, a single-engine supersonic Navy Carrier jet.  Bill Rankin's mission that day was to test fly the F-8 on a flight from South Weymouth to Marine Corp Air Station, Beaufort, South Carolina.

The F-8 would prove to have a proud history.  Capable of flight speeds exceeding 1,000 miles an hour it would later be used on unarmed reconnaissance missions during the Cuban Missile Crisis and would be flown in aerial combat over Vietnam where it would enjoy a 6 to 1 kill ratio.

After takeoff, Bill turned South, and out of the cockpit he could see some pretty serious weather between him and South Carolina.  The storm extended up over 45,000 feet but it shouldn't cause a flying problem because Bill would be flying the Crusader at 500 knots at an elevation above 47,000 feet.

But Bill would have a problem that day...a very bad day indeed.  At 47,000 feet, and flying at Mach 0.82, Bill heard a boom in the back of the aircraft and the aircraft lost all power.  When Bill pulled the handle for auxiliary power the lever came off in his hand.  Then, Bill got a fire alarm signally the need to immediately eject...almost certain death at 47,000 feet.

Well, Bill did eject and did so without benefit of pressure suit.  He was immediately ejected into -50 degree air temperatures and air pressures that caused his stomach and vital organs to swell up like huge balloons, at which time his capillaries began to explode and he began bleeding out of eyes, ears, nose and mouth.  Bill had one tiny thing in his favor; he still had his emergency oxygen supply and managed to strap it on while being buffeted by violent storm winds.

Colonel Rankin free fell for over five minutes as his chute wouldn't open.  Then he began to be shunted horizontally across the skies.  Still at the very top of the storm system, Bill's canopy finally opened where he was immediately slammed into the canopy itself.  At any moment he was fearful that his lines would get entangled for a swift slam down to mother Earth.

Soon Bill was in the very heart of the storm and the rain was so thick, so violent, that he had to force himself not to breathe, lest he drown in a wall of rain squalls.  Well the gods thought that wasn't quite enough for old Bill, for as he descended further, hail began to pelt him mercilessly.  Then gigantic blue flashes of lightning began to appear all about him.  One lightning bolt lit up his parachute and, for a moment, he thought he was making a dramatic appearance into heaven.  And the gale force winds began to send Bill spinning and the hail continued to pound him and sent him into violent spasms of vomiting which, alone, might have did him in if the vomit decided to reverse course.

Miraculously, Bill Rankin, still alive, descended into the calm over North Carolina.  He landed in a tree, managed to free himself from his chute, and take inventory.  He had bruises, open welts, frostbite and was suffering from severe decompression.  47 minutes had elapsed since Bill ejected from that F-8 Crusader...47 minutes of everything Mother Nature could throw at him. 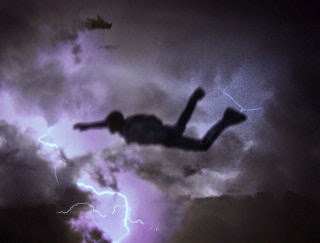 Bill was rescued and taken to the nearest hospital where he would spend several weeks recuperating.  Surprisingly, Bill suffered no long term medical problems and, within weeks, was back on full duty. Time Magazine put Bill's picture on the cover and his story was a big one.  He was the only human in history to survive descending into the bowels of a cumulonimbus storm tower, one of the mightiest storms in nature.

So Bill decided he was a lucky man, and he decided to write a book about his miracle.  He titled his book "The Man Who Rode the Thunder".  Tough Marine.  And you might be pleased to know that this Marine lived to the ripe old age of 89...passed away in 2009, in a far less violent manner than that afternoon long ago when he had a really bad day.

Post Script:  I'm ashamed to say that his 22 year Air Force vet did not know this story.  I have my cousin Jerry to thank for leading me to some interesting research.

A bad day but an amazing ordeal. I have heard about this before but not read his book, your description will have me going to the bookstore and getting a copy. Thanks for the inspiring read this morning.

Thank you for this excellent post! Quite a miracle indeed.

Craig, the book is out of print...Amazon has one for $67. You might find it in a library though.

You're welcome, Carol! Glad you enjoyed it!

What happened to the plane?
Nice read today, you are good at these stories!!!

Thanks, Jerry. As for the plane, I asked the same question and, out of a dozen articles I read on this, not one mentioned examination of the crash site or where it landed. If I ever find out I'll let you know.