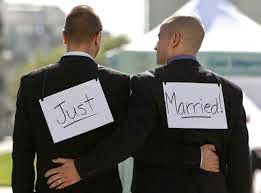 Okay, let's stop the bitching about gay marriage.  Let's let our politicians know that we're tired of spending taxpayer dollars to fight this thing, state by state, in court.  The Supremes have already shown which way they are going on this so it's time to end the futility of preserving the concept of traditional family.

Folks, there are very few "traditional families" these days.  Let's look at a few things here and see why we just might give up fighting gay marriage and why that might be a good thing.

First and foremost, if we give up sniping about gay marriage maybe they'll stop marching in St. Patrick's Day Parades and taking Macy's to court for preventing them from blowing up a monster condom meant to promote Aids awareness.  And if we all let gays marry maybe they'll be so busy having domestic spats that they'll have less energy to get in our face with their gayness.

Secondly, what is so damn special about marriage anyway?  With 50% of marriages ending in divorce what the hell are we defending anyway?  Hell, we know that 75% of Blacks don't even bother with the marriage certificate....they just trot out a potpourri of birth certificates with the various sperm donors listed on them.  At 50% divorce rates who's to say that Blacks don't have it right?  Skip those god-awful expensive weddings and save a bundle...that way there's more to divvy up when Divorce Court time finally arrives.

And please don't talk about the nuclear family...those died about the time Steve Jobs turned out an Apple iPod and only got worse when the I-Phone came along.  Your children divorced you for Steve Jobs so face up to it.  This year we had a 16 year old kid beat his mom to death with an iron skillet because she took away his iPhone privileges so this is pretty serious stuff.  And since parents no longer feel the need to help with homework, or attend a PTA meeting to see how school and child are doing, why bother even calling ourselves "family".

Whether intentional or not, the government has succeeded in making families obsolete.  Make a mistake, get a divorce and the government will shower the family remnant with a generous host of government benefits that will just dazzle you; Section 8 housing vouchers, welfare, food stamps, WIC, taxpayer paid health care, taxpayer funded pre-school, kindergarten and free school breakfast and lunches.  Imagine that!  Mom no longer has to prepare breakfast or make sandwiches for lunch, or even pick the kid up from school.  And, if she wants to have a little sexual dalliance with her current Romeo, hell the school even has an after school program!  Hey, soon the school system will start feeding the kid dinner too and then you're really home free!

So, really, let's let the gays in on this wonderful institution!  God knows why they would want it, but if they do, more power to them!  Just please, get out of my face for a few hours, please!
Posted by A Modest Scribler at 2:00 AM

I think it is Geese that find mates for life, humans of every persuasion don't seem to be able to do that.
I read that in Israeli nursing homes marijuana is legal and freely distributed! This same calming effect is happening here State by State.
I don't worry about anything anymore. I know our Government is protecting us!

And it looks like your neighbor friend has given you a little more of the Kandy Krush to settle you down a bit....:)

I have always thought if you don't like same sex marriage don't marry someone of the same sex. That is all we need, senior citizen potheads pooping themselves.

It's an educational thing, a common sense thing, a work ethic thing...and a hundred other "things".

Let me tell you about a different neighbor! She is white, her partner is black although that is not the issue to this story. 2 kids, a boy (different father, of course!) is about 12 and a girl about 10. Both really nice kids, both have been to my little garden pool with their friends, all behaving nicely. The "parents" are drug addicts living on about $3,000 per month free government money!!! I think they are "cleaning up" though, from originally heroin to methadone and now Chrystal Meth. They just got evicted from their rental house (don't know why).So now the girl is living with one neighbor the boy is living with another neighbor. The State gave the "parents" $400 from an emergency fund to put them (without kids) in a motel for 3 nights and some State agency is hunting for a different housing situation for them. I really do believe in helping people who help themselves but these people should simply be shot and put out of their misery! Not the kids, they still stand a chance.
I guess the reason I tell this story is that these are not statistics, these are real people screwing up. $3,000 a month from the taxpayers is really all borrowed money and 3 times my Social Security I worked 50 years to get!!! If the children are not officially taken away they too will be ruined! and those drug addicts are living it up in a motel on MY MONEY!!!!
I may be a liberal but I am not crazy!
Sorry, I had to get this off my chest!

Yes, Modest Scribler, you got my point, EXACTLY!

I'm a bit surprised that you didn't turn them in, Jerry. I would have, if only for the kids.

if the cops couldn't nail them maybe Child Protective Services could have.

Satire? Perhaps. Serious? Troubling, if so... You routinely rail against popular culture, leftist political figures, the lack of civility and the direction of society. Rightly so. "Accepting" homosexual marriage is inevitable, you think? What is the point behind the incessant desire of homosexuals to have the right to marry other same-sex people recognized as a right? It is about changing the attitude of the nation to accept homosexuality as the moral equivalent of heterosexuality. So, you acquiesce and now it's OK... Do you really think that will end their push to force their perverted view of normalcy on the rest of us? The Bible tells us that if we accept sin, God will hold us accountable. If this is really OK with you, then all the columns you write about how bad society is becoming are pointless, because when base morality is twisted to accept the unacceptable, stop complaining about elections or welfare - we've lost a lot more than that.

Randy, perhaps I gave you too much credit for being able to detect sarcasm and irony....maybe i was wrong.