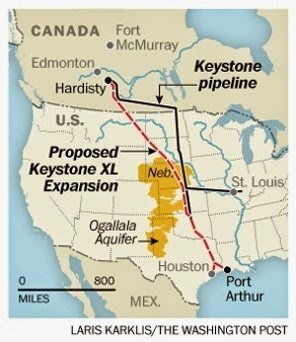 When Transcanada and Conoco Phillips first drew up the blueprints for the Keystone XL pipeline they foresaw the potential for environmental activism.  So they developed virtual fool proof  30 inch diameter pipe, interspersed with automated pumping systems that would shut down at the first hint of a pipeline link.  Further, they proposed that the pipeline be layered beneath at least four feet of earth along the entire length.

While the entire pipeline itself was to be 2,195 miles long, much of the pipeline has already been laid within the U.S.,  with just a thousand miles more added to bring that oil down to Port Arthur, Texas for refining.  As part of the agreement Canada would sell all of those hundreds of millions of barrels of Alberta oil for $43 dollars a barrel, less than half the cost we are paying Saudi Arabia to ship it to us now, and two thirds cheaper every time OPEC gets a hair up their ass and wants to punish us.

The Keystone pipeline had a dual advantage since our own oil from the North Dakota fields could hitchhike a ride down to Port Arthur for an even cheaper barrel of crude.

Well, the "greenies" and President Obama jumped in right away.  Barry called a halt to construction and ordered the EPA to do an extensive environmental study to see if those good old EPA folks couldn't find a potential environmental hazard.  Well, EPA tried.  They tried very, very hard, but when the smoke cleared the EPA found so many ironclad safety systems that they were forced to give the project their blessing.

Even after EPA approval Barry felt he needed those "greenie" votes and refused to sign Congressional legislation that approved the project.  So, for four years the project has been in limbo and, yesterday Canada said they had had enough of waiting.  On Wednesday Bloomberg News announced that Canada is pulling back from the inter country agreement and will build their own pipeline.  Initial thought was that they would build a pipeline from Western Alberta to the Pacific where China could hook up their oil barges, pump them full and haul them back to China.  Then something remarkable happened.

With Vladimir Putin invading the Ukraine and cutting off Russian oil to Western Europe, and with India reluctant to shake hands with Putin, that $43 dollar oil from Canada became mighty attractive; so much so that both Europe and India are bidding up the price toward the current world market price of $90 bucks a barrel.

So Canada on Wednesday told Obama to fuck off...they are going to use current natural gas pipelines, augmented by some new build out and pipe that $43 dollar oil over to St. Johns and sell it for twice the price that it was being offered to the United States.

America's petroleum engineers had projected that the ready availability of that Canadian oil would have brought U.S. gas prices down to those wonderful $1.60 a gallon mark, below the $1.84 per gallon price back when Obama took office.  Further, the Keystone Pipeline was projected to create tens of thousands of jobs, to both finish build out, then permanent jobs in maintaining it.

Well, we all knew that Barry hates gas.  After all, it was his own energy czar who said what America needs is $10 dollar gas to get American to quit buying so much of it and begin buying $75,000 electric cars with exploding batteries and limited range.

Well, Barry has screwed the American people once more.  We'll keep paying higher and higher gas prices and wealthy Canada will boost her already sterling 9% GNP growth rate while we are mired in a 2% growth rate. Canada says these new oil sales may boost their GNP by a third, leaving America eating their dust...and our national pipeline dry as a bone.

I'm trying to weigh the pros and cons. Thanks for the post.

Well I don't really see a problem. Let the Canadians develop all this infrastructure and and build their own pipeline, then we will just declare War! God knows it is OUR oil!

:) Jerry you sometimes remind me of a Doonsbury cartoon. You're the bald guy always smoking the cigarette in a cigarette holder. Inspired by that gonzo journalist Marshall Thompson.

I always knew this pipeline project was a good idea even without knowing about all the safety and environmental safeguards. How fucking stupid does one have to be to actually think obama is not a treasonist non-leader.Way way way past time to relieve him and the so called "green" idiots from office and let them have Nevada all to themselves.Plenty of wind to blow the sunshine right up their asses. Jerry that is too funny!

I try sooooo hard not to be negative or hateful, BUT, I'm damn sick of all the greenies, being politically correct, accusations of racism and 'career' federal program leaches breaking America's back!! It truly makes me want to run to the mountains, live off the land & be left alone.

Craig, from your lips to God's ear. Let's start booting some of them out on November 4th. Please vote and tell your friends to vote. We need Senate control to stop at least some of this madness.

Carol, I'll take the plot right next to you guys! It doesn't look like it's going to get a whole lot better.

Craig, In your comment you aid."and let them have Nevada all to themselves." Well I live in Nevada and we do not want the messiah and his minions coming here. We have one major fuck up, Harry Reid.. And don't need any more!

Reid is a major embarrassment to Nevada and the entire country! here