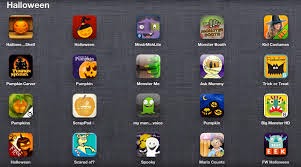 Well, it had to happen, didn't it?  Some highly creative and innovative rug rat has developed a Halloween application for both the I-Phone and Android.  The program Ap allows a kid to identify the best homes to hit on their candy rounds.  Kind of like YELP, the program tells you whose the most friendly, whose passing out the best candy, and can even tell you what kind of candy bars are being offered.  That way, if you've already exceeded your own self determined limit of Peanut Butter Cups, or Kit-Katts, you might want to swing over to the address of the home dishing out Snickers bars.

Conversely, the program will headline the "cheapies"; the folks passing out Tootsie Rolls or Sour Balls, saving you the time and effort of hitting those homes.  Ain't technology wonderful?

I kinda liked it the way it was when I was a kid.  Like Forest Gump said, "you never knew what you were going to get!".  Back then we weren't allowed ready access to candy any time we wanted it, so we were pretty happy to get free candy, no matter what kind it was.  You might come upon a porch and be given a single tootsie roll, or you might hit the big time with home made popcorn balls or whole candy bars...those always brought smiles.  We even had one lady up the street that made candy and caramel apples...a slight inconvenience because you didn't want to drop that baby in your sack so you were almost forced to eat that candy apple on the run.

When my kids were trick or treating we always considered ourself fortunate because it was on an Air Force base.  The kids were safe and we had no fear that some pervert was putting razor blades inside a candy bar, as was a nasty trend in the 80's.  And just as I did as a kid, my kids would bring home their sweet loot, grab four or five pieces of candy allowed for the night, then dump the rest in big plastic pickle jars to be doled out for the next few weeks.  And, most of the time, they didn't notice if Dad pirated a couple of peanut butter logs after they had all gone to bed.  Sweet!

I imagine this new Halloween Ap will put a stop to much of the adult mischief that can be harmful to kids.  One kid getting suspect candy can alert the neighborhood in a single text.  That's a good thing....as long as they don't use their phones to tape Dad with his fat fingers in their candy jar.

Happy Halloween people!
Posted by A Modest Scribler at 2:00 AM

There was one house where I grew up that had the honor system for candy,the box was always empty by the time we got to that house.Happy Halloween

No honor system on Halloween, Craig...especially with kids and candy.

Boo right back at ya, Jerry.

Freshly popped popcorn! It is a neighborhood thing we host. Has been for the last 20 years. Happy Halloween!

Popcorn is good anon...I would have been happy to have that!