You think the pic above is scary?  Here's something even scarier.  Do you remember in the final days of the 2012 Presidential elections when Mitt Romney was leading in many of the polls?  The media was feeding you all kinds of warm fuzzies (in an effort to lull you into staying home on election day?)  So how did that turn out for you, gang?

Well, the media is at it again.  They are telling you how Republicans have this huge lead and will most likely take over the Senate.  Well, let me show you a little pie chart showing who is REALLY getting the vote out: 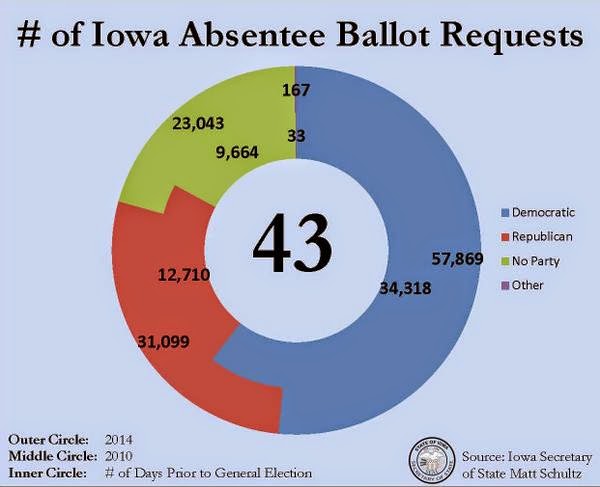 This is a little snapshot out of Iowa.  It shows who has been turning in their early voting ballots.  And yes, it is the Democrats winning the turnout, and not by a small margin; 57,869 for Dems against the Repub's sickly 31,099.  And remember, this was the year Iowa was going to punish Barry!

The U.S. Elections Project says this same trend is going on all over the country.  This disgusts me on two levels; I do not want to wake up the morning after the election and see Congress controlled by Democrats!  The last time that happened they wrote a $870 billion dollar pork stimulus bill that achieved nothing, and they rammed Obamacare down our throats.

Don't believe this?  Well, just look at voter turnout in 2010...only 42.7% of eligible voters turned out. In 2012 only 57% turned out for a Presidential election, with Democrats voting in huge numbers.  And we got Barack Obama for four more years.

Hey, look.  I've heard all the stupid excuses for not voting; Repubs are no different than Dems, my one vote doesn't count (so of course it does when voters turn out!), I was busy, I was sick on election day, and on and on.

I take my vote seriously, and I take my responsibilities as a citizen seriously.  I've already sent in my early ballot so I've carried out one of my citizenship duties.  Have you registered?  If not, do it now!  Did you apply for an early ballot?  If not, for god's sake pencil in November 4th on your calendar, skip breakfast for one god-damn day and get your ass to a voting booth!

We know the majority of Americans are against Obama's policies.  I see it every day on a variety of message boards...bitch after bitch..in the tens of thousands!  And yet, less than half of these cretins will go to the polls and vote.

You are absolutely correct.

When I hear people bitch I ask them if they voted, if they say no they have no right bitch. I hand deliver my absentee ballot, not much faith in our local postal employees.