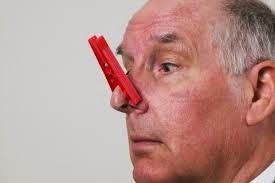 I'm sitting here in the early morning, all the doors and windows to my house standing wide open, to allow a fresh breeze to blow through.  Just took a shower and immersed myself in Old Spice Vanilla Scented shower gel.  As soon as the stores open I'm planning on heading out to Bed, Bath and Beyond and pick up a few baskets of pot pourri and a few boxes of apple-cinnamon carpet scent.

You see, I'm a bit self-conscious this morning over an article I just read from Time Magazine.  Essentially, this little medical research report says old people really do emit an odor.

Now, I've had occasion to get a whiff of a distinct odor emanating from the homes of my elderly aunts.  I always thought that was due to their keeping their little homes so airtight so that a musty odor might have built up over time.  And, when young, I have encountered a codger or two who didn't bathe as often as they should..perhaps in fear of slipping in the tub or shower.  Well, even at my advanced age I always thought I was safe from those things; I air out my house pretty regularly and I shower at least once a day, so I thought I was safe from accusations that I might be a little ripe.

Sadly, not true.  Seems one Johan Lundstrom, a research chemist, has discovered that old people do indeed throw off a distinct scent...an odor that is most frequently detected by those under the age of 45.  Johan got the idea for his research one day when he walked into a retirement home in Philadelphia and began to detect an odor that reminded him of his childhood back in Sweden.  His mother had been a health care worker at a senior home and he used to accompany her,  always a little taken aback by the smell of the place.   So when Lundstrom found that same scent in this American senior home as the one back in Sweden he was a little amazed by his discovery.

This prompted Lundstrom to begin a research project to study the phenomenon.  No doubt, cadging a little federal grant money, Lundstrom went out and purchased a case of nursing pads.  He then corralled an impressive number of research volunteers in three distinct age groups; 20-30 years old, 45-55 years old and 75 to 95 years old, both men and women.  Each research subject was then asked to wear a nursing pad under the arm, and keep it on while sleeping for five consecutive nights.  Lundstrom then took the nursing pads and shredded them into little pieces and dropped them into jars, with each jar representing the various age groups.    Lundstrom then brought in a team of young folks, under 35, and no doubt paid them to lift the top off the jars and asked them to identify whether the pad had been worn by which age group.

Amazingly, those young "whipper-sniffers" were able to identify the old codger jar nearly every time!  Thankfully, the results weren't all bad.  Nearly all of the test sniffers said the old people scent was not unpleasant...it was just distinctive.  Sniffers were far more turned off by the body odor given off by the younger set than they were for the old people scent.

Well, Lundstrom and his staff ran all of this research through his super-computer and came up with the theory that the young "whipper-sniffers" were so adept at identifying the scent of the old because it's built into our genetic makeup.  Lundstrom says this talent for identifying scent is so that those of child rearing age can identify suitable mates; the youngest and strongest and healthiest...then allows them to cull for prime breeding material.

Well, all this was very  informative.  But I must have sniffed my own underarms half a dozen times while reading this report.  As soon as I finished I got up and threw open my doors and windows and took a good scrub in the shower.  Happily, Lundstom says old people don't have that sharp sense of smell, thus can't smell each other very well.  Still, I'm going to feel a bit ill at ease when I'm around those damn millennials and their offspring.  Perhaps I'll rig up a harness and strap a couple of those little white odor cakes that folks attach to their toilet bowls....let's see those damn whipper snappers smell their way through those!

Lose the vanilla, anything smells better than vanilla. Except cilantro.

It's not really vanilla, Brian...kinda a mix of tropicals and lime with a very subtle hint of vanilla...actually I like it pretty well.

Don't like the strong scent of vanilla either unless i'm eating it in something.

Why do people always pick on older people? Who is going to study why hippies smell, stink?