Barry On The Ballot 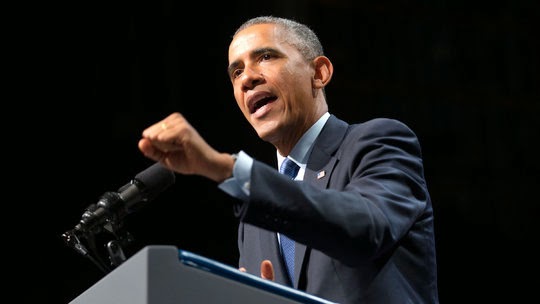 President Obama was back in his home town of Chicago over the weekend.  He was campaigning for Democratic candidates and raising more money for the Dem war chest.  In his keynote speech Barry boldly proclaimed that he was indeed on the ballot on November 4th.  He jokingly mentioned that he had broken his promise to Michelle...a pledge that his campaigning days are over.  I found that drop dead funny since that's all Barry has done during his entire six years in office.

Anyway, Barry said he's proud of his foreign policy and really, really proud of how he's managed the economy.  He cited again this week's jobs figures that showed unemployment had dropped to 5.9%.  Hey, this is a really pretty number for Kool Aid drinkers and millions of folks who don't follow the news any deeper than that.

You see, the problem with the numbers is that another 317,000 people left the labor force last month. And the labor participation rate dropped to record levels; 59.7%.  Hey, when people give up looking for a job, you don't have to count them as "unemployed", right?  Magic!  That's even lower than Jimmy Carter's all time low of 62% in 1978.  Ronald Reagan, in four short years, brought the LPR up to near 67% and it stayed relatively steady until 2009, when it began dropping.

So, while Obama's base squirmed in orgasmic delight, even MSNBC made note that the Labor Participation Rate is dreadful.  Andrea Mitchell, main squeeze of Alan Greenspan, and devoted Obama follower, said on Meet The Press this week that the LPR is frightening and doesn't bode well for Democrats.

Other numbers got crunched this week as well.  For instance, we learned that over 93 million Americans are unemployed.  That leaves less than half of able bodied adults remaining in the work force.  And we also learned that those applying for food stamps now outnumber those actually looking for job at a rate of 2 to 1.

While in Chi-town Barry also spoke to his Hispanic followers; said "I'm gonna need your back next month, okay?"  He then promised to amnesty those millions of illegal Mexicans as soon as the election is over.  The guy is brilliant!  He knows the American people are now so dumb that they'll forget all about that amnesty stuff and vote Democratic big time...even if it costs them their job!

A footnote here:  Attorney General Eric Holder has chosen to disregard an appellate judge's court order to turn over all Fast and Furious Vaughn Index documents to the courts.  The deadline for turnover came and passed and Holder said "the Judicial has their laws and the Executive Branch has theirs...we deem our own laws to be superior to the courts".

Dictatorship complete.
Posted by A Modest Scribler at 2:00 AM

Must be nice to be above the law.If any of us ignore even a parking ticket we are in trouble. Congress needs to issue an arrest warrant for holder, if possible.

Must be nice to be above the law.If any of us ignore even a parking ticket we are in trouble. Congress needs to issue an arrest warrant for holder, if possible.

Our Government would Lie to us?

Craig, I don't know what Congress can do...perhaps something else, we'll see. As to Obama making up his own laws, he's setting a bad precedent for future Presidents. We're in long term trouble on that one.

1) Dims will support D candidates no matter what, even when they are driving to vote while unemployed; 2) Holder has no reason to comply with court orders since enforcement of the law is the sole province of the Executive Branch - that's Obama.
3) We, the people, no longer control our government. Get used to it, 'cause it's only gonna get worse.

I heard on Lou Dobbs on Fox Business channel

a retired military officer(I don't remember his name or rank) but he had the best description for Owebama... " He is a liberal arts graduate pretending to be president"..His words! Absolute truth!
I have another descriptor of this current administration...
Ineptocracy:
A system of government where the least capable to lead are elected by the least capable of producing, and where the members of society least likely to sustain themselves or succeed, are rewarded with goods and services paid for by the confiscated wealth of a diminishing number of producers.

I enjoy sharing things like this.
Feel free to use these words where you think they will do the most good..! ENJOY!

Ineptocracy, Steve. Have never heard a better description of the Obama Administration and his supporters.