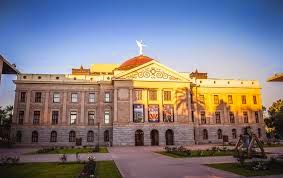 Arizona these days is the "poster boy" for conservative government trying to stem the tide of creeping liberalism.  Why should that be important for our readers who live elsewhere?  Because what we do here will probably ultimately decide what kind of country we want to be.  This, the first in a series about the "grand battle" to combat oppressive liberalism and reckless spending and why it has consequences for all of the rest of America.

The Arizona Republic newspaper enjoys printing historic photos of various private and government buildings erected in the 50's and 60's.  So last week my attention was drawn to the old Glendale Police Station as it stood some 60 years ago.  The building was stark in its simplicity; a cement block structure with iron bars over the windows, the facade clearly telling anyone passing by that this was not a place you'd want to spend the night.

Glendale Police drove old Plymouth Black & Whites and they kept in communication with the police dispatcher on cranky old two way radios.  A Glendale cop in 1950 was paid $2,400 per year and the Chief raked in $4,400 a year.  There was no grand retirement package that would have afforded luxury living after 30 years on the force; there simply wasn't that kind of tax base to support such frivolousness.

The old Glendale Fire Station was manned by community volunteer firemen.  You got trained by the one Fire Chief who might have had a degree in Fire Sciences, or might not, having learned the job by putting out dozens of fires over the years.

Today, both Fire and Police draw starting salaries of $80,000 per year, with the salary rising to a lofty $150,000 a year by the time they retire.  And now our Fire Stations are repositories for abandoned babies and our Fireman are well schooled as well as well paid.  And so that none of them are over-taxed, and so that they have time to promote themselves to the public, we have more fire stations per capita than at any time in our history.

The Police Station is built from fine marble with majestic columns guarding the entrance, facilities befitting a Roman emperor, and we now have more police clerks managing a desk than we have police patrols.  We even have small armies of police personnel whose only function is to attend school assemblies and tell the kiddies how grand the police are, and teams of public police spokesmen whose only job is to stand in front of television cameras and brief crime reporters.

And we need more police because neighbors no longer talk to each other and need the police to respond to a dog barking, or wandering into a neighbor's yard, and to settle meth and coke-induced domestic disputes, or to even respond to an HOA complaint that some dude is displaying the American flag in his front yard.

So we now have these huge Fire and Police organizations.  Their budgets grow larger and larger each year as their sense of self importance grows.  And our politicians crawl in bed with both Fire and Police (and the general government bureaucracy as well) because they feed off each other's greed.  The pol promises our public servants that their lucrative salary and retirement packages will continue if they'll only throw their support his way. Right up till the time they won't.

Arizona citizens are now waking up to that greed, finally.  Prop 487 is on the ballot this year.  It is an initiative that would convert these huge retirement packages to a 401k plan where public servants would be required to pay into their own retirement plan.  It would also end the practice of "spiking" where employees save all their sick and vacation pay,  then convert it into "salary" in their final year of service.  So, because their retirement is based on their last salary paid, these public servants can boost their retirement pay by $50 grand a year just by artificially inflating their salary.  Many Fire, Police, and even our Court Judges make over $200,000 dollars a year because of this salary "spiking".  Prop 487 would end this practice and relieve the public from paying for obscene retirement pensions, and would require that our public servants put some skin in the game through a 401k like private sector employees do.

It should be noted that our famed Sheriff Joe Arpaio's operation is kind of "revenue neutral".  He saves millions of dollars a year through the use of hundreds of private citizens who work for free and are known as "Joe's posse".  Joe saves millions more by housing his prisoners in our famous "tent city jails", garbing them in pink underwear and serves them baloney sandwiches.    However, in "law-suit happy" America Joe gets sued a lot.  One meth head ended up killing himself because he was forced into his pink underwear.  The county board, gutless nellies, always settle out of court.  So whatever Joe saves in law enforcement he gives back in lawsuit settlements because he's tough on criminals.
But we have saved on Joe's retirement costs because, at 80, he says he has no plans to retire.

Still the public employee unions, including fire and police, are spending a fortune to try and convince the taxpayer that $200,000 grand a year is a fair retirement pension, and that they shouldn't have to contribute a dime to it.  We'll find out on November 4th if the voter has decided he's paid enough.

No fights today! I agree 100%
Vote Early and Vote Often!

Peace, Jerry. And yes, at this particular time I would love to vote early and often...maybe it would offset some of this liberal ballot stuffing and serial voting. (Did you read about a liberal group haunting Black neighborhoods, pulling unopened mail ballots out of the trash and sending them in with the appropriate Democratic box checked?...talk about slimy).

Best of luck curtailing public unions filled with the self important better than the rest of us douchebags.As they call themselves"heros".Go Joe!!

Best of luck curtailing public unions filled with the self important better than the rest of us douchebags.As they call themselves"heros".Go Joe!!

In San Jose, CA, we are facing a similar situation. Cop/fireman pension and healthcare benefits have grown exponentially in the past 12 years to the point where SJ has had to reduce city services in part to pay for these expenses. Every tactic you listed ("pension spiking" has occurred here). Two years ago, our mayor sponsored a proposition (Measure B) that would curtail these benefits for future hires and require them to pay into their pension - it passed with 70% of the vote. Cop unions have sued to have those provisions overturned, being successful in part, failing on others. In SJ, the "first responder" characterization is that the people are opposing law enforcement, that the public is "breaking trust" with the cops. The police force has declined from 1,400 to approximately 1,050 in the past 2 - 3 years, with union officials encouraging new hires to "consider their options in employment". The notion of paying 6-figure retirement plans to 44 year-old cops/firemen when they can get the same job in another city and earn another 6-figure retirement is obscene, yet the indignation of these government employees is not something they are at all ashamed of. Here, they tell us these plans were negotiated and there is an obligation owed the cops, that any attempt to reign in these costs "breaks the contract"... All the while telling us crime has skyrocketed because of the lack of law enforcement officers. Similar situation, we'll see how it plays out. I'm routinely eviscerated by cop folks when I say they shouldn't be getting this free ride for life (BTW - A retired O-6 int he military receives 50% of the best year's base pay, minus taxes with not COLA guaranteed. Think cops would agree to that? Not a chance). "Reasonable" is no longer in the public employee's lexicon, and the pols that continue to give away the store are a big part of that problem. WE are the main culprit because we elect them.

Randy, we're getting the same feedback from the public employee unions here...they have pledged to take this to court if we pass the initiative, basing their case on a break with the contract, which they assume should go on forever and ever.