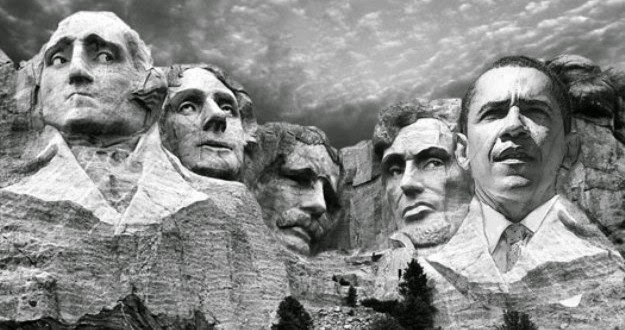 A campaign to have Barack Obama's image carved into Mt. Rushmore is slowly gaining steam.  Apparently, the discussion began about three years ago when Obama rated himself among the top four American Presidents in history.  While his statement was met with derision by the Republican party a number of Obama's biggest admirers are saying he deserves a place up there with four of America's greatest Presidents.

When queried, the National Park Service said that there's simply no room for an additional carving...the end rock face being too small to accommodate another memorial.  Al Sharpton immediately branded the NPS as racist and stated "had President Obama done nothing else, he deserves a spot up on Mt. Rushmore as the first African American President.

Al is not alone.  Obama's many fans, including the NAACP and a significant number of his colleagues in Congress are clamoring for a bill that would authorize a project to put Obama up on the mount.  According to the Huffington Post a Facebook Page has already been established to promote the effort and has received thousands of "likes".

And I just read that some polling organization ran a poll among the nation's university history professors and Obama received significant support from them as well.  One George Washington University professor said that it is certainly within the realm of possibility that Obama might be honored as the first African American President.  Another offered that Obama might go up on Mt. Rushmore on merit, citing his success in reversing climate change, pulling out of Iraq, jump starting the economy and his Nobel Peace Prize.

I find all this fascinating.  We've never seen greater ethnic strife, more Americans have given up looking for work than ever before in our history, food stamp users have doubled under Obama, and 93 million Americans are unemployed.

But that's not all.  The Cato Institute just came out with their annual rankings of countries who promote the greatest economic freedom.  In less than a decade America has gone from number 2 in the world to number 36.  We are 29th in free trade, 38th in sound money management, 36th in the value of our legal system, 1st in Police Militarization, 1st in Government Surveillance, and 1st in Government Intrusiveness.

It's interesting to note that, during the government shutdown a couple of years ago, when Obama was making every effort to show how we might suffer if he couldn't spend all he wants, he ordered the National Park Service to shut down Mt. Rushmore, just as he did with the open air war memorials in the capitol.  Well, the NPS didn't have a tarp big enough to cover Mt. Rushmore so they opted to just block off the roads that led to the monument.  Perhaps if we let Barry have his face up there that might never happen again.  Hey, maybe there really is a pony under that pile of horse manure.

I thought they were going to use the back side of Crazy Horses' horse.

Sorry. No pony. It's all horse manure. They'd have to put a military guard on it because I guarantee, people would use it for target practice.

Craig, that sounds like an insult to native Americans. Remember they laughed at him the last time he showed up on a reservation.

Frank, don't you dare tell me there's no pony...I've waded through six years of manure so there better be a pony.

And two more years of manure left. Boy, does that stink...