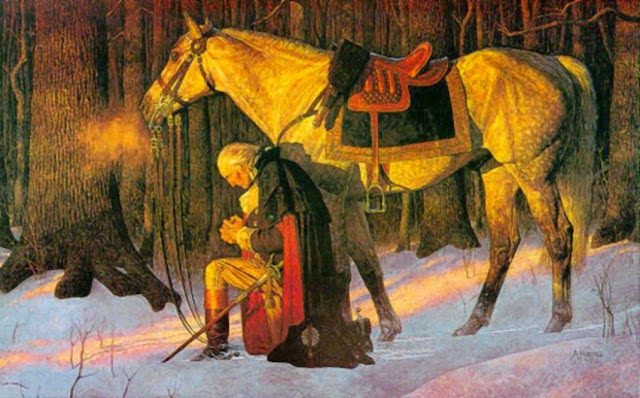 It was October, 1781.  George Washington and French General Rochambeau stood on a small hill looking down on the fields outside Yorktown.  A rider approached and brought news of British General Cornwallis's surrender.  Washington was said to have put his arm on the shoulder of the French general, then walked a few steps away and looked down upon the battlefield through misted eyes.

In that moment the first burdens of war began to be lifted from his broad shoulders.  No doubt the tears came from both relief that the war was essentially over as well a bit of mourning for the thousands who had given their lives for America's freedom.  200,000 men had fought the war and 25,000 had died in battle.  Thousands more died in the hulls of British prison ships and many thousands more would hobble home without arms or legs, or both.

The war was officially over in 1783, once the peace treaties had been signed and the British evacuated from New York.  In November Washington would call together all of them and give his farewell speech.  He would thank them for their service, then remind them that only good citizenry could keep us free.

Later that week Washington would meet the last time with his officer corp.  His words to them were brief, more personal as he struggled through trying to give thanks for their loyalty and their service through all of the eight difficult years when defeat was all but certain except for one heroic act after another.  Finally, with tears flowing from his eyes, no longer able to speak, he turned and hugged old Henry Knox, the general who had led a party all the way to Canada to haul an old four ton British cannon back through the snowy mountain passes all the way to Boston where it would be used to pound the British and shock them into abandoning Boston....the patriots first rare victory.

After hugging and kissing Knox, Washington would hug and kiss and bid farewell to each of his officers.  After bidding them farewell Washington left and began the business of seeing his army home over the next few weeks.  He would leave then himself, his two aides accompanying him to Annapolis, Maryland...to the old Maryland statehouse where the Continental Congress would convene to accept Washington's resignation as General of the Continental Army.  Washington sent a message ahead, asking if the Congress would prefer the surrendering of his commission in writing, or in person.  Congress chose the latter.

So, on 23 December 1783, Washington rose and walked to the podium to address the Congress.  His short speech to them was less than five minutes long.  He thanked them profusely for giving their trust in his leadership, reminding them that, from the very beginning, he was frightened that he hadn't felt qualified for the job.  He then thanked God for the benevolent provence that carried his army to victory.  He reminded the Congress that many of his men had gone home penniless and deserved to be paid for their sacrifices.

He then said a final goodbye, handed over his written resignation, and walked down the center aisle of the statehouse, looking left and right as the entire house was hushed in silence, tears streaming from their eyes.

His aides waited outside, the General's horse already saddled.  As Washington mounted his steed, the entire congregation exited the statehouse and stood watching the General ride south to Mount Vernon, where George Washington, private citizen, would spend Christmas at home for the first time in many years.

Following the end of the war in 1783, King George III asked what Washington would do next and was told of rumors that he would return to his farm, prompting the King to state, "if he does that, he will be the greatest man in the world." Washington did return to private life and retired to his plantation at Mount Vernon, having no desire to be King.
Posted by A Modest Scribler at 2:00 AM

A truly honorable man and leader.