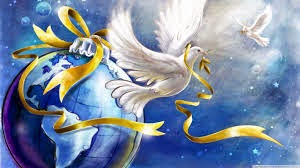 "Let there be peace on earth..and let it begin with me."  Peace, brothers and sisters.  There seems to be thousands of people who will fill the streets in protests over the death of a couple of thugs.  They loot and burn and spout the most hateful invective you are ever likely to hear.  Politicians and the Hollywood elite join in the fray, hopeful to garner a few extra votes come next election, or send you rushing to the theater to see the next cinema triumph!  Your government masters insist that you hurry and sign up for an Obamacare program lest you suffer IRS persecution in the form of massive fines come next April.  When you see ISIS raping little girls and beheading Christians, all in the name of their religion, you can't know peace.

When all you want for this Christmas season is to know peace, there are those who would rob you of it.  Well, take heart, there are still wonderful people around, loving people, people of generous heart, heroes among us.

On Friday night Johnathon Robertson and his wife escaped from their mobile home as a massive fire consumed everything they owned.  When Johnathon, 42 years old, and a Navy vet, saw that his ten year old son hadn't made it out, he plunged directly into the flames and, despite excruciating pain, ran to his son's bedroom, wrapped him in a blanket and carried him out to safety.  While his son is in stable condition in a Grand Prairie, Louisiana hospital, Johnathon didn't make it, succumbing to burns all over his body.    And the Grand Prairie community is not letting this tragedy lie...they are responding with donations of money and furniture and a place to live for a family facing sorrow in what is supposed to be a season of joy.

Up in Nevada, 87 year old Helen Smith got a phone call that her son up in Utah was dying.  She jumped in her old car and headed north, to be with her son in his last days.  While en route, a Nevada highway patrolman stopped Helen for erratic driving.  After being issued a warning, Helen, while trying to maneuver back onto the highway, backed into the trooper's car.  The trooper, Andrew Pollard, then fearing for the old lady's safety, had her car brought to the local sheriff's station and personally drove Helen to the Utah state line.  When they reached the state line, Patrolman Pollard had arranged to have Helen picked up by a Utah State Patrolman.  In Utah, four different state patrolman took turns driving Helen to her hospital destination.  Helen's son is now in hospice care and, thanks to five different law enforcement officers, she'll be there with her son and be able to bid him farewell.

Up in Massachusetts a woman walked into a Toys R Us store and paid out $20,000 dollars to pay off the layaway balances for moms and dads buying toys for their kids.  In another story an anonymous man paid for the purchases of the eight people in line behind him.

Up in Rotterdam, N.Y. a spanking new Walmart cashier pulled out $40 dollars from her own purse when an elderly man buying food for himself and his dog came up short.  When the next customer in line tried to reimburse her she refused, saying it's against company policy to receive cash from customers.

Peace, my brothers and sisters.  Let there be peace to all of you in this most joyous of seasons.  There are still some mighty fine people left in the world.
Posted by A Modest Scribler at 2:00 AM

Thanks for the look at the good side of people.

It's always good to hear positive stories like that. There is still hope. Thank you for your post and the efforts you put into them. Happy Holidays to you and your family and the other readers.

You're welcome, Craig. And yes, Brian, hope is always a valuable commodity, especially these days. Happy Holidays to you and yours as well.

Finally getting around to reading some blogs, since shipping orders for this season are behind me now (I closed my store for Christmas break!). Just wanted to say thanks for the heart warming stories!! Good to hear!

So glad you're going to get some much needed rest, Carol. And I'm glad the stories helped to cheer you.