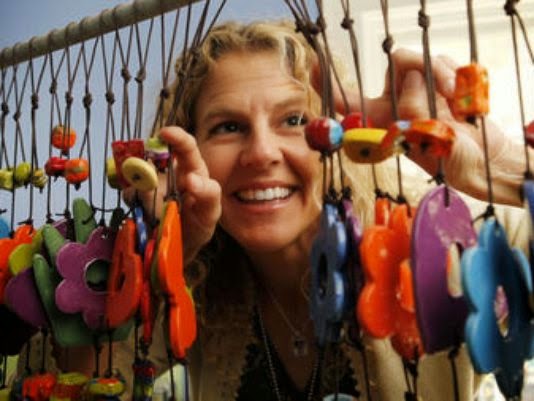 On the morning of 29 March, 2002, Jeannette Mare was holding her two year old son, Ben, in her arms.  He had a case of the croup and she was trying to comfort him.  Soon, Jeannette realized that Ben was in distress and having difficulty breathing.  So she rushed her son to the hospital, but it was too late.  Ben died as one of those rare occurrences that only God can explain.

As with any parent who has lost a child, Jeannette was distraught.  She simply could not understand how an otherwise healthy little boy could be taken so soon, and in such a bizarre manner.  So, she was lost, without hope, and unable to cope with the loss.

As therapy, Jeannette began to sting together little wind chimes, anything to keep her fingers busy and her mind off of her sorrow.  When she ran out of materials friends would rush in and bring her little doo-hickeys to string together.  Jeannette would hang them on some convenient post and even a gentle breeze would send the wind chimes dancing...like little bells that might bring peace to a broken heart.

So Jeannette got the idea that, if those little "Ben's bells" could comfort her, perhaps they might be comforting to others facing similar sadness and sorrows.  She began hanging them around her native Tucson and folks began to delight in finding one of Ben's bells hanging from a tree, on a fence post, or gracing someone's front porch.

Soon Jeannette's friends began joining her in crafting Ben's bells was well.  And soon there were hundreds being discovered, first around Tucson, then spreading northward into Phoenix and other environs around Arizona.

So each year in March, the anniversary month of Ben's death, a thousand of Ben's bells will be draped over tree branches, on park benches, on hiking trails and bike paths, left there to give hope and happiness to those who come across them.  Arizonans are now aware of the Ben's bell campaign and are always overjoyed to find one.

One lady who found one was out for a walk, despondent; she had already lost her house to foreclosure, had lost her car and had just been told her employer was letting her go.  On her walk she came across one of Ben's bells and she dropped to her knees and began sobbing.  She took her discovery as an omen that her life was about to change for the good and was sure the spirit of little Ben had brought her hope for a better future.

Now Ben's bells can be found just about anywhere.  The good people down in Tucson stay busy as Ben's bells were there for Katrina victims, were found circling a Mexican school where 44 little children were burned to death in a tragic fire.  They were found in abundance at Sandy Hook and show up at every 9/11 memorial ceremony.

So Jeannette Mare lives on, and little Ben's spirit lives and flourishes and brings hope and comfort where it is most needed.  And the sounds of lovely bells have brought comfort and peace and hope for thousands who were fortunate enough to hear them.
Posted by A Modest Scribler at 7:26 AM

I have three children and to lose one scares me more than anything. My heart truly goes out to any that have had to suffer this.

Yes, Brian...I understand your fear. We lost one so we know her sorrow.