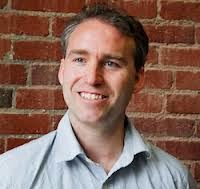 Steve Austin was the Million Dollar Man.  He lives in Beverly Hills and drives a Mercedes.  Dan Austin is the $88 dollar man, lives up in Seattle, Washington and gets around on a bike.

Dan Austin is one of those folks so damn full of the zest for life that he seems to be just bursting at the seams with it.  A couple of decades ago he and his brother and a friend set off on a cross country bike tour, then wrote a book about it.  That experience spurred Dan to get into telling a small part of the world's stories in print and with film.  He proved to be good enough to become an award winning documentary film maker.

While traveling the world Dan learned of the immense heartbreak of child sex trafficking.  He met little six and seven year old girls who had been sold into the sex trade and their stories broke his heart.  He thought of how tragic it was that little girls had their innocence stolen from them at such a young and tender age.  And, thanks to the heroic efforts of many fine organizations, many of these little girls have been rescued and returned to their families, or put in the care of foster parents.

So Dan started an organization called 88Bikes.Org.  For a mere $88 dollars Dan pairs a donor up with a needy child.  The organization delivers the bikes to a little girl, teach them some rudimentary bike maintenance, then watches with joy as these little girls pedal down the road in their pink bikes, enjoying once again a few moments of childhood joy and innocent play.  Dan has delivered bikes in Vietnam and Thailand and Nepal and India and in other parts of the world where children are grieving.  Dan's group has delivered over 2,000 bikes so far and the movement is growing.

So Dan Austin is not the Million Dollar Man.  He's just the $88 dollar man.  But he's given back a small chunk of childhood joy to those who were robbed of theirs....and for that his gifts are priceless.

Thank God their is still good in the world....ride on little girls!

Posted by A Modest Scribler at 8:39 AM