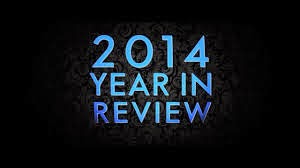 You've no doubt noticed that, for the past two weeks, I've tried to stay away from negativity....have, instead, focused my attention on the nobility of the human spirit.  But, now it's time to do a "Year In Review", and damned if I can avoid talking about the obvious, good or not good.

Let's begin with the headlines out just yesterday.  Time Magazine conducted their "most admired" poll and it seems Barack Obama got the nod as "Most Admired American Man" and Hillary won it as the "Most Admired Woman".  From that polling I can only assume that wizardry thrives in the second decade of the 21st Century.  The little man (and woman) behind the curtain still has the "Oz-ites" under his spell and everything is just "hunky dory" in the Emerald City.

Perhaps it's some form of mass hypnosis; after all just day before yesterday Barry paused from his golf game in Hawaii to announce that race relations in America had really improved since he took office in 2009! So, apparently, adult Black men do not mind a 30% unemployment rate and Black youth do not mind a 40% unemployment rate.  And Ferguson never happened, and a 7-time habitual criminal named Eric Garner didn't die while pedaling illegal cigarettes, and the 500 or so Blacks who died on the South Side of Chicago this year didn't happen, and two Black thugs didn't kill an 89 year old WWII vet over in Oklahoma City, and they didn't rape his 88 year old wife, and the plague of Black urban crime doesn't exist either.

And everything must be going great in the Middle East too!  President Obama announced yesterday that America's combat role in Afghanistan is now officially over and both ISIS and Al Quaida are on the run...this despite Al Quaida's massacring 133 little school kids in Pakistan last week and ISIS raping six year old girls in Iraq, and the mass murder of Christians didn't happen either.

On the home front Barry touts a year end Wall Street rally even as 93 million Americans remain unemployed or underemployed and more people are on food stamps than at any time in our history, and home ownership has declined to levels not seen since the 1950's.  And Barry boasts of 5 or 6 million people who now receive free health care...but only at the expense of working Americans who now pay higher premiums, and are now double taxed through both premium increases and via the income tax to support a class of people who get free Medicaid while owning late model cars, big screen TV's and can afford to pay their I-Phone bills...(unless they are getting free Obamaphones which are funded by those more than $10 bucks of monthly "excise taxes" that show up on your cell phone bill.

And, alas, last summer we learned that Bill and Hillary were dead broke when they left the White House, and that it took them a whole five years to accrue their first $100 million after their dire poverty in 2000 when they were down to their last two mansions.

And, if things couldn't get any better, Barack Obama, after seeing his party creamed in the 2014 mid-terms, interpreted the election to mean Americans were all for granting amnesty to 7 million more illegal Mexicans....so he did so.  And somehow he convinced America that bringing in another 7 million impoverished Mexicans to the labor force, and to our social safety net programs, America will be better off.

And he must be right...cause yesterday America voted him the "Most Admired" American.

HAPPY NEW YEAR DEAR READER!
Posted by A Modest Scribler at 2:00 AM

Well, I enjoyed the last 2 weeks of your blogs! So, here we go, another New Year! Clearly there must be 2 (at least) ways to look at Obama and the dichotomy of a raising Stock Market with such low unemployment. Somebody is getting rich! I think American Politics and our Economic System is like any good mystery novel: follow the money and you will find the nefarious characters!
We have had six years of a "do nothing Congress" and now it may work? Maybe now Obama can be an obstructionist President and not the other way around as it has been?
These next 2 years will be pivotal for sure. Can't say American Politics aren't interesting.
We live in interesting times.
Happy New Year my friend!

Health, wealth and happiness to you and yours, Jerry. Happy New Year!

Hmmm. Must of been a "No Republicans" sign on the voting door because they sure didn't ask me my opinion of Obama. And Hitlery? Ask all the families of the people that "mysteriously" died while the two Clingons were in Political office if they admire her. Time magazine is irrelevant anyway. Now if Playboy votes them in, THAT'S saying something...

The voting baffles me too, Frank. I personally don't know anyone who'll speak up for the Anointed One.