"That Town In The Twilight Zone" 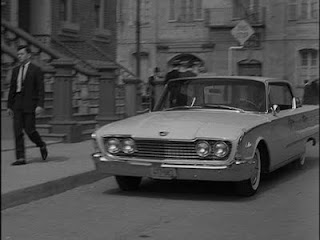 I just finished watching an old episode of the Twilight Zone.  This one was about the little girl whose parents raised her to communicate only in telepathy.  That's really not the point.  This little girl...and the episode's characters all lived in "that town"; the one with the old fashioned street lights, wide streets, plentitude of parks, tree-shaded sidewalks and well dress citizens.  We all know "that town"; we've seen it in a hundred Twilight Zone episodes.  It's where the friendly neighbors hammered down the good doctor's bomb shelter, it's the town on Mars that lured the astronauts into thinking they were "among friends and family".  It's the town that hosted Earl Holliman as he walked around and found no living thing.  It's also the town where a meek and servile Dick York, simple bank teller, upon the flip of a coin, develops telepathic powers and brings down the meanie banking boss, prevents a kindly old bank guard from desperation theft..and wins the girl...all in 30 minutes time.

As I recall, this "set" was on the old MGM lot.  It was Mickey Rooney's hometown in those Andy Hardy movies and it was the same town where a young Debbie Reynolds and another MGM ingenue danced across sidewalks and neighbor's lawns singing a repetitive gibberish that charmed movie viewers in the 40's.  In the 50's the Beaver occupied the town; he and Wally tripped down the sidewalk to a school that knew not crystal meth or pot and the school's only black mark was when the Beav and the pudgy guy lost the money for some school charity.

We older folks were and are a pretty forgiving lot; we knew damn well this "town" was but a mirage..but we were willing to suspend reality and allow our imagination to work overtime.  Hell, we would not have been surprised if the Beaver wandered into a shot when old Earl was talking to that mannequin or Judy and Mickey came dancing down the streets to charm the astronauts into submission.

Good morning! Yes, I liked "that town" also but your story reminds me that our own memories of whatever town of our youth might be equally confused. "My town" from my perspective could be a lot different than I really remember it. I remember as a kid "my town" so so very quiet and boring I couldn't wait to get out of it and break "free".
Older now I would give a lot to get it back, but, like Twilight Zone, it may never have been there!

I feel almost exactly like you, Jerry. Except I'm pretty sure the town I remember provided a far better place to live that what I see today. It's all relative I guess.