"A Cold-Eyed Look At Christmas" 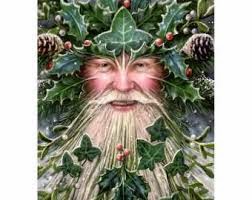 It's time to take a hard and cold-eyed and honest look at Christmas.  The Christmas we celebrate today is a conglomeration of pagan practice married to our religiosity, then greatly embellished by commercialism.  Let's remember that all the greenery; the holly berry and the fir tree had their birth with the ancient Druids.  Druids celebrated the winter solstice, the shortest day of the year by bringing greenery into the home.  This was to hearten the god of the sun at his weakest moment, the greenery also promising that spring would come again and the earth would resume providing the bounty of seed and flower and drive the chill from our bones.

It would not be until centuries later, when Martin Luther paused in a clearing of fir trees, looked up into a field of bright stars, and got the idea to place candles on and around the home greenery, that fir trees and holly berry would take on a religious significance....and begin the practice of brightly adorning fir trees brought into the home.

And it would be another two centuries before America would embrace the idea of a Christmas tree.  The "Pennsylvania Dutch" and the Germans first began the tradition in America.  Even as late as the 1830's when the Dutch were putting up a tree, American puritanism scoffed at the idea, believing that Christmas should be a solemn celebration of the birth of Christ.

In the 1890's the idea of Christmas trees finally caught on in America.  And Santa wasn't such a big deal even then.  Even Clement Moore, in his "The Night Before Christmas" had the fat man wrapped in nondescript furs, nothing like the brightly red clad fellow who appeared first in a 1931 Coca Cola ad!

Oh there is some good to be gleaned from the Christmas season.  Folks do tend to turn a kinder eye toward their fellow man....and we postpone our current level of savagery for a few weeks.  And, with the dissipation of the nuclear family, Christmas does give us a reason to gather together and form a familial circle for a time.

And Christmas still has magic for those twixt two and ten, who still believe in Santa Claus, their cynicism not fully developed, their hopes and dreams of wonder still intact.  And we, the cynical, still see the light in a child eyes and remember how it once was for us as well.  And that seems more than enough to keep Christmas in our hearts.

But, for those who still believe in the story; of a carpenter who walked the earth for far too brief a time, for those who remember his healing and forgiving words, Christmas will continue to be a season for celebrating an ethos that makes us better people.  And who could ask for more than that.

Want, need and Read! That is a great combination! I always add a tool of some kind on the theory that if you really want something bad enough you could make it yourself. It is amazing how mastering a tool can add to confidence. I like the mellow and good will of the season and very thankful that it is Christmas and not Allah Akbar-Mas! Merry Christmas!

Merry Christmas! How long until Happy Holidays becomes:"Non political,non Religious lgbt&a end of season awknowledgement" kind of a long greeting, here in Kalifornia it would not surprise me.Merry Christmas and Happy New Year!