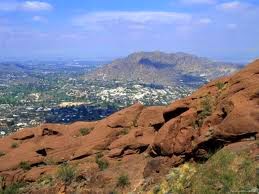 I've lived in deserts too long.  Ten years in Saudi Arabia and ten years in Arizona.  Like most desert dwellers, I like sunshine.  We like our rain like we like our women---fast.  We want to see a monsoon blow in, drop three inches of rain in an hour, then move on, up over the northeast mountain ranges, and do what they will up in Colorado or Oklahoma or Missouri...and leave us with sunny skies.

Give us two cold and cloudy days in a row and we start whimpering like little girls and run to turn the thermostat up.  So this week, with night temperatures near freezing, and highs in the 50's, we're pretty damn miserable.  We leave the walk shorts hanging on the bathroom door and don wooly pants and parkas just for a run to the supermarket for eggs and milk.

Even my doggies are not immune from the cold spell.  They zip outside in the morning , do a fast squat, then leave their other business until later in the morning when temps are more civil.  While all summer they try to keep their distance from each other in the doggie bed, these days they lay "yin yang" as close to each other as they can get.

I'm tough enough to put up with a few hours of gray skies...if there's some rain tied to it.  What I can't stand is for the damn clouds to linger all day and, like an old maid, simply refuse to "put out."

So the weather people are telling us we're going to be 5 degrees below normal for this time of year, with partly cloudy skies, for at least the next week.  Strange weather for these parts.  Not as strange though as one "El Nino" year back in the mid-90's when I was still working in Saudi.  I remember coming home to San Diego for a 30 day leave.  And damned if it didn't rain for every one of those 30 days....then the damn thing made its way all the way to the Saudi desert where, upon my return, I faced still another month of bizarre rainy weather.  By the time those two months of unending rain was over I felt myself scrubbing green mold off my shoulders before getting dressed for work.

So I guess I can tolerate a week or so of cloudy skies and below normal temps.  I'll keep scratching the itch caused by wooly pants and parka fur for a bit longer.  And I'll keep cranking up the thermostat until this damn cold spell eases.

But I find it for more comfortable, and far more enjoyable when I can mock my cousins out in snow bound Missouri and Oklahoma...as I put on T-shirt and walking shorts for the milk and egg runs.  For now though, I guess I'm getting my just "des(s)erts for making fun of them in the past.

Sigh.
Posted by A Modest Scribler at 6:33 AM