Sasha and Malia; Swearing Off Turkeys and Rap Music 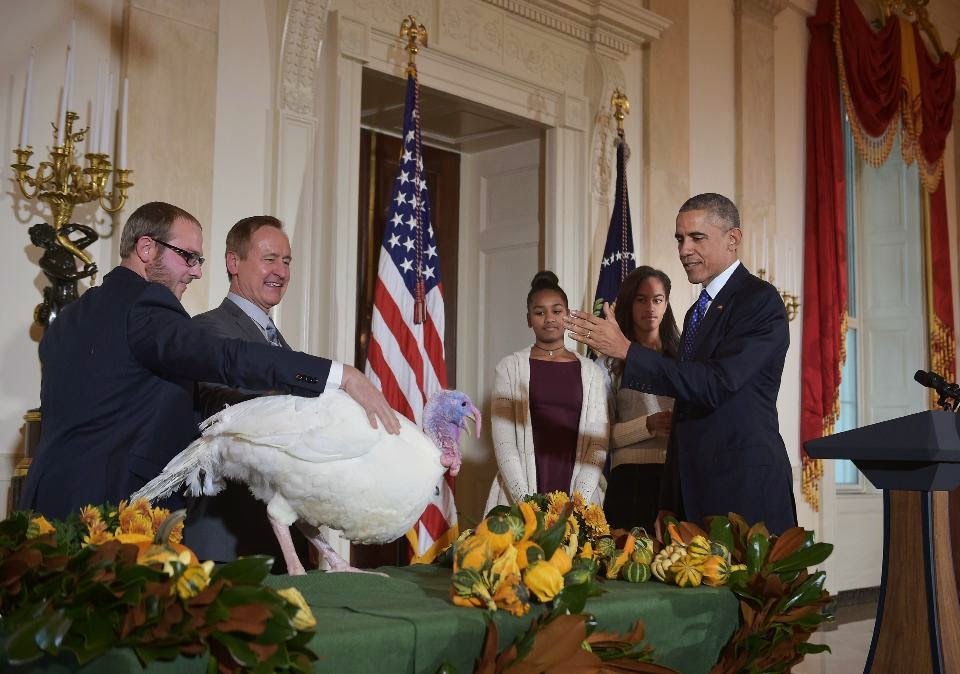 On the Wednesday before Thanksgiving Barack Hussein Obama swept into the East Room with Sasha and Malia and deigned to participate in the annual Thanksgiving turkey pardon.  Both girls looked bored out of their minds and stood sometimes with their arms crossed and anxious to have this over with.  As Barry offered a poor joke about more November "pardons" the girls stood stone faced and didn't even bother to laugh at Dad's joke.  When Barry implored them to come pet the turkey they issued a collective "nah'."

So of course that very day a Republican staffer took the opportunity to criticize the two girls for their spoiled behavior.  The two had no doubt just returned from their private Sidwell school where their school chef had served them a gourmet lunch, so they probably weren't too excited about a turkey pardon.

Well, you would have thought the Republican staffer had just called those two teens "nigger" or something.  Both Republicans and Democrats criticized the attack on the girls and the staffer was forced to hastily offer an apology.  While the staffer was probably right in criticizing a couple of spoiled teens, politically it didn't make any sense.

And, really, what would you expect from the fruit of Obama's loins?  Barry's been spoiled all his life and the girls are just following the example of both Mom and Dad who seem to like America only when its kissing their collective asses.

And I still believe Obama has serious mental issues.  He has an ego far beyond that of the normal.  Witness his Chicago speech this week where he used the words "I" or "Me" 192 times in a five minute speech.  So of course the girls have developed that same "me" attitude and can no longer be bothered to trot out for another photo op and be expected to show any joy or pride in American tradition...even if it's just a turkey pardon.

Imagine having to hang around Barry all the time.  More than likely he tells the girls that he knows more about rap music than they do....and he hangs with .50 Cent and other rappers and reminds them constantly of just how cool he is.  Well, we all know that with teens, as soon as Mom and Dad start liking something it's time to move on to something else.  And as to the poorly offered "pardon joke" they more than likely heard Barry rehearse that line ten times before he emerged to utter it before the cameras.....how hard is it to giggle at something so rehearsed?

So it appears that after nearly seven years of the Obama presidency even his own daughters are weary of his schtick.  They probably both ran up to the family quarters, issued a collective sigh and began deleting rap music from their I-Phone as well as "The Wit And Wisdom of Barack Hussein Obama."

Life is tough these days in the White House.

Not much can be said. With Brack and Moochelle as their parents, they don't stand a chance. He bores the Hell out of me and I don't have to see his ass every day.