Reflections On A Christmas Morning 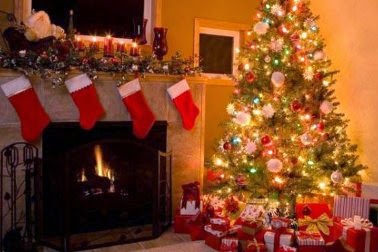 As was his custom, the old man rose early on Christmas morning, gently threw back the covers from his side of the bed, and tiptoed out into the hallway, unwilling to awaken his wife so early in the morning.  She would be busy enough this day, assembling the small feast for the two of them, the table resplendent whether for two or twenty.

He waddled down the hallway, creaking joints and muscles frozen still with sleep.  He drifted into the kitchen, switching on the coffee pot, then bathed his face in cold water over the sink.  The dogs, already beginning their anxious mewing, were let out into the back yard for their early morning ablutions.  By the time they came back in, their fir stiff from the morning cold, the coffee was ready so he poured a cup and wandered out to the living room and plunked down into his easy chair.  Taking the first aromatic swig of his morning coffee he sat in silent reflection, only the lights from the Christmas tree illuminating his small corner of the morning.  The dogs settled at his feet and shivered a time or two, pawed a small space on the carpet, then settled in for a spell of early morning napping.

The old man felt a slight chill so he rose and started a fire in the hearth, fed it a few pieces of ash, then settled back in his chair, satisfied to sit and admire hearth and home.  He looked again at the tree, brightly lit and softly aglow with half a century of lights and ornaments collected over Christmases past.  The tree had gone up only last night because he reveled in the scent of fresh fir on Christmas morning.  And, as he breathed in the rich scent of evergreen his mind drifted back to the Christmases of his childhood.  All of a sudden there were sixty trees, not one...a metaphorical forest of firs that had graced a corner of Christmases at homes over these three score years.

And that wonderful scent of fir took him back...back...to Christmas mornings when the wonderful smells of fresh cinnamon rolls from the oven distracted a child for only a moment, the lure of brightly wrapped packages nearly overpowering all else.  And the old man, now sixty years later, could still smell the fresh leather from the belt and holster that cradled his two Roy Rogers guns....and the scent of serious gun play as the row of caps threaded their way up with every drop of the hammer.  And what was that over on the other side of the room?  Was that sis bouncing a little rubber ball and grabbing a "twosie" or "threesie" or "foursie" before the little ball hits the floor again?  And was that my little brother moaning in irritation that his gun belt was too big too cinch around his elfin waist?

And, yes, he even thought of cheap plastic footballs, and old Radio Flyers plunked from the trash barrel, new found toys for a less fortunate boy to resurrect and set out for a round of pop bottle collecting?  Even the hard candy Christmases were good ones...because there are no bad Christmases as a child.  Even when there is very little the Christmas night dreams are chocked full of childhood wishes for shiny red Radio Flyers and Lionel trains circling the Christmas tree...and not having them did not mar the dreams that came in the night.

And, when it was time for him to have his own children, Christmas was no less joyous.  More joyful perhaps because giving is so much better than receiving.  So the old man looked deeper into the vast depths of his morning tree...and saw little girls, their eyes alight with Barbie Dolls and Cabbage Patch dolls and little boys with their own cap guns and police cars with roaring siren and stockings stuffed with sweets for a childhood tongue.

As the old man took his last sip of his first cup of coffee a gentle hand found his shoulder and he reached up to clasp her hand and whisper a quiet good morning.  The time for reflection was over; it was time to get up and begin to adorn a shiny new Christmas in this, his 66th year.  Time to fashion still another Christmas day and add it to his long list of Christmas wonders...so that this day too will be one deserving of reflection on some future Christmas morning when all is quiet...and the memories shall blossom once again.

Merry Christmas everyone.  May all your Christmases be worthy of quiet reflection.
Posted by A Modest Scribler at 2:00 AM

Thank you for allowing us the visit this early Christmas morning! This story reminds me of me.
Merry Christmas and thank you for the gift of your always interesting and insightful blog! Jerry

The thanks should come from me, Jerry...with no one listening I would just be talking to an empty room.

Yes, that is why I do not blog very often anymore. The "sounds of silence"!
But I like your blog and maybe one day we will meet! Merry Christmas, my friend!

May you have a wonderful Christmas! Thank you for all the interesting and heart warming stories throughout the year!!

And my best to you and yours, Carol, on this glorious Christmas morning!

Have a very Merry Christmas!

Same to you, Brian.

Beautiful,,, I love to read these reflections you share,,,

Thank you, Darlene Sweetie (I can call her sweetie cause she's my sis-in-law) ;)