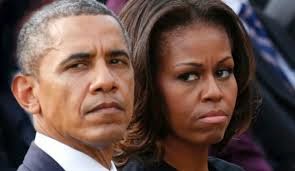 We've been mistreating Barack and Michelle again.  In case you missed it, People Magazine this week will feature a sorrowful story about how Barry and Michelle have been the victim of racism, even after six years in the White House.

Michelle relates how she went out to Target a couple of years ago, just to show her "one-ness" with the common people, and damned if some customer didn't ask if she'd please retrieve something from the top shelf in the laundry aisle.  My, my!  I didn't know having someone with a handicap, or vertically challenged asking you to help them grab something up high is racist!  I've had at least a dozen people ask me for similar favors in the grocery store and never once thought I was being a victim of racism...I thought it was just because I'm taller!  Well, anyway, that was the last time Michelle went out to a Target store again!  The nerve!

And Barry said he was at a cocktail party, dressed in full tux, and someone ask him to fetch them a drink.  He seems to assume that the folks asking didn't know he was the POTUS.  My thinking is they DID know and just wanted to see Barry do one thing useful during his Presidency.  Apparently someone also handed Barry their car keys, expecting Barry to fetch their car...again, same answer as above.  No racism intended.

What I find puzzling is when Barry goes out to play golf at Washington National everybody has to clear the course and allow Barry and pals to play alone.  I don't know if that's racist but it is surely arrogant and certainly inconvenient for the poor working stiffs who were just looking to get in a round of golf on a rare day off.  Oh well.

Last week 40 year news veteran Ann Compton revealed that Obama sometimes attacks them with long unending strings of vulgarity when he's unhappy with their reporting of his massive fails.  I guess that's not racist though because Barry's Black and most of the press corp are White.

And remember that Marine who gave Obama the grand salute when debarking from Air Force One?  Remember how Barry returned that salute with a dip of his Starbucks cup?  Well, the Marine was White...but I guess that wasn't racism either.

I'm really worried about this folks!  Soon we'll no doubt hear again that Michelle is once again not proud to be an American....and all because we treat her and Barry so damned badly.

I hope their daughters do are able to see through their parents racist attitude. Bong boy barry and mooshell are racist angry entitled lowlifes.

No longe pay any attention to allegations of "racism" from anybody, blacks especially. The "First Family" is an embarrassment. In large part, that attitude is why politicians (and politics) are something I don't care about any more.