"The 'Cat Man' of Parliament Hill" 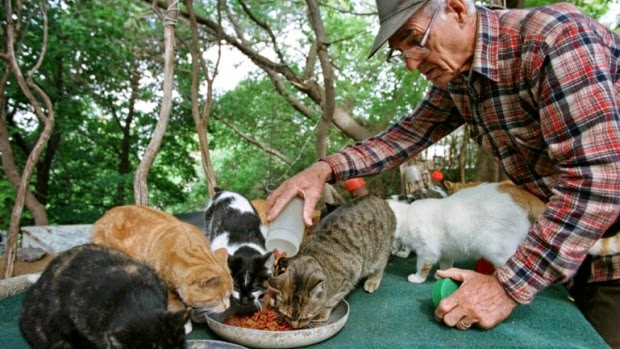 Rene Chartrand died a couple of weeks ago.  He was 92 years old.  Don't feel bad if you don't know him.  He's one of those "small life" heroes who didn't make headlines much, but touched the lives of dozens of God's creatures.....a colony of feral cats.

Long story made as short as possible.  Many, many years ago, when Rene Chartrand was serving his country in the Air Force, the caretaker of Parliament Hill, center of power for Ottawa, Ontario, Canada's government center, was having a mouse problem.  So he went out and recruited half a dozen cats and let them loose on Parliament grounds.  Soon Parliament was free of mice...but now simply awash with cats.  Not having much human interaction and left to fend for themselves the cats turned feral and the general public didn't much care to have anything to do with them.

Then along came a gentle lady named Irene Desormeaux, who took it upon herself to show up every afternoon with cat food for the colony of Parliament Hill cats.  Irene carried on with this task for the rest of her life.  When she was in her last days, she was fully prepared to meet her maker....except for one thing.."who would feed the cats?".

So along comes good old blue collar worker, Air Force vet, Rene Chartrand.  And somehow Irene roped old Rene into inheriting her bag of feed pans, and the task of scrounging up enough from his retirement pension for cat food, and set him off on the road to Parliament Hill.

So 71 year old Rene Chartrand built a feeding shelter on Parliament Hill, and he hauled enough cat food to feed those damn cats every day, 365 days a year, come rain or shine.   Soon, onlookers stopped to gaze on Rene as he banged his pots together and saw his herd of cats scurrying over to Rene for their daily meal.

And before you knew it old Rene began drawing an audience of regulars, amazed at this superb act of kindness toward a herd of wild cats.  And the people drew nearer...and damned if they didn't start caring about those orphan cats too!  And damned if those wild cats didn't start feeling fond of their human visitors, and began tolerating a lap session and a gentle stroking or two.

Alas, in the first week of December, Rene Chartrand passed away, at the golden age of 92, his life extended no doubt through his selfless act of kindness to a herd of cats that no one seemed to give a damn much about until Rene came along.

On December 29th the community of Ottawa, Ontario will hold a memorial service for The Cat Man of Parliament Hill.  They'll honor his contribution toward making life a bit more interesting..and a bit more caring.  There's no word yet on who'll take up the cat care....but if Rene's heartfelt service to a group of God's creatures is an example, someone will be banging those pans again real soon.
Posted by A Modest Scribler at 2:00 AM

I have seen the feral cats of Rome, said to date back to the Roman Emperor.
Keeps the plague away, I guess.
Happy "Boxing Day"!

Happy Boxing Day to you, Jerry. Eat the leftovers today.