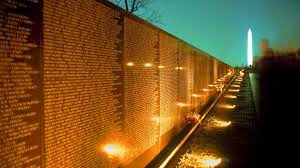 I was doing a little shopping and, as I often do to keep my old bald head warm, I was wearing my old Vietnam unit's military hat.  While I was comparing soup prices two nearly identical looking ladies came up to me and thanked me for my service.  That happens a lot to me these days.  But these ladies, who seemed to be somewhere in their late 40's, were a notch more enthusiastic about it, patting me on the shoulder while expressing their thanks.

I thanked them and they moved further up the aisle where, presumably their mother, was in one of those grocery mobility carts.  The daughters and mother exchanged some words as the daughters were putting what was surely the makings for a Christmas dinner in mom's basket.  Stuffing mix and a ham and veggies and dinner rolls were in that cart, and while the girls were still shopping the mom rolled down the aisle toward me.  She then extended her hand and thanked me for my service, then thanked my family for their service because, as she said "they served too."  She then said she had lost her husband in Vietnam and the girls had never had the chance to meet their dad, and so they always reacted so warmly every time they ran into a Vietnam vet.  Well, that got to me and I had a hard time to keep from blubbering right their in the store aisle.  Here were these ladies thanking a vet who made it back, while they had lost a husband and a dad who gave "the last full measure."

I'm ashamed to say that I didn't express my thanks for their sacrifice...I knew if I said another word about it I would lose it entirely.  I just said a quick thanks and got the hell out of that store. So, I'll just hope they knew...and I hope, despite that one empty chair at Christmas dinner, that their Christmas is a joyous one.
Posted by A Modest Scribler at 5:59 AM

Anyone with feelings at all will have felt the same way you did. I didn't serve but I've got many friends who did and a few who didn't come back. I know my Dad wouldn't talk about his days fighting in WWII. I guess now, thinking back, it was easier on him not to talk about it, though I didn't understand then. Funny. Never thought of "thanking" my Dad, but I can now. Thanks Dad. And thank you...

Thanks for the kind thoughts, Frank. I'm sure your dad heard your thanks. Merry Christmas.