Good News! For A Change 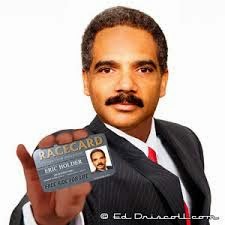 Well, boys and girls...we got a bit of good news last week.  Obama's main "hit man", Attorney General Eric Holder has announced his resignation.  Whew!  Yes, I know that Obama will try to pick another AG who is equally adept at blaming Whitey for the world's ills...but, trust me, no one could be worse than Holder.

And didn't Holder get off on the right foot back in 2009!  His first proclamation was that any American who won't embrace illegal immigration, or willingly walk through a Detroit ghetto at midnight, is a coward!

But I think Holder's resignation has more to do with legal considerations.  A report out this week by Judicial Watch cites a federal judge's ruling which ordered the Justice Department to turn over something called a "Vaughn Index" on all documents pertaining to Fast and Furious by 22 October.  Apparently this Vaughn Index is a sweeping call for all documents without redactions made by the Justice Department.  Redactions are those lovely black blocks that cover up whole sentences that our federal masters deem may be harmful to national security...or their own asses.  Well the judge said turn it all over.

By resigning, Holder can avoid having to testify in court, or in Congress, about any false testimony he made in earlier Congressional hearings.  As a civilian he can plead the fifth and make the court prove his guilt.  This strategy should work for all of Holder's misdeeds, be it his failure to investigate the IRS harassment, or his active involvement in NSA spying and AP wiretapping.  Just plead the 5th, baby and all is well....or at least not half as bad as if he gets nailed while in office.

I believe any fair minded person will acknowledge that this guy has been the most racist and most criminal Attorney General we've seen for at least a century.  He brags about his many achievements but the only thing I've seen him do is skirt the law, fail to enforce our laws, battle individual states who legislated to stop illegal immigration and voter fraud and serve as political hit man for Barack Obama.  He has politicized an office that is supposed to uphold the law and has, instead, turned it into a Gestapo like organization that attacked those who oppose Obama and selectively enforced our laws all the while making up their own.

Good riddance to one less militant negro in the Obama regime.
Posted by A Modest Scribler at 2:00 AM

I was quite happy to see he resigned.Put his ass in prison.

That's where he needs to be, Craig. There's more room now that he released a couple of hundred thousand Black thugs.