When We Could Dream 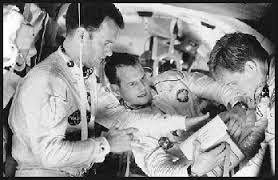 There are about a dozen movies that, when flipping channels and I come up on one, I just can't turn away, I love them so dearly.  "Casa Blanca", "12 Angry Men", and yes, "Apollo 13".   So last night I'm channel surfing and found AMC showing "Apollo 13".  And I sat for the next two hours wallowing in the nostalgia for an age when we dreamed big dreams, when we dared to do great things.

Those Apollo missions represented a time when man's character and man's daring trumped technology...when we were kings of our own destiny.  Unlike today, when we spend over half of our entire budget taking care of people who can't or won't work, we spent less than .075% of the national budget on putting men on the moon and developing technologies that were converted to commercial applications that generated billions of dollars in revenue, both for the private and public sector.

And those astronauts, fly boys from WWII, and Vietnam, and test pilots, took those Apollo craft up and ran it with a tiny computer with 2k of memory and less than 1,000th of the computer power of your teenage son's IPAD.

Until 2011 we were still out there exploring, launching space telescopes and doing great things.  Then, in 2011, Barack Obama decided we needed to spend more on his voting constituents and less on space discovery.  He cut the already tiny NASA budget by two thirds and the Space Shuttles are now mothballed and America, god help us, now hitches rides up to the space station on Russian space craft....and paying a pretty penny for the ride.

And what did we lose when Obama chose "vote sucking" over space?  Well, let's just look at what came out of the space program:

We gave NASA seed money and it paid us back in treasure and technology heretofore unheard of by man.  Alas, now we no longer seek out greatness, our foresight is limited to concerns about the next election and who we can bribe to win their vote.....now we can only look back at what was...and no more dream of what could be.

When Ron Howard began preparing to film "Apollo 13" he interviewed the chief NASA engineer who supervised the effort to help Oddysey limp home.    When Howard asked the engineer how they dealt with so many engineering obstacles to get the crew home, the engineer said "Well, failure was just never an option."

If successes were only valued the way they once were, and if only failures were more reviled, and not an excuse for sloth, what a great country we would still be.

So I watch "Apollo 13" again and again, and remember a glorious time when we could dream.

Yes, it was a great movie and during a better time. A shame to dump NASA, especially at a time when we need to be so much more than we are.

Yes, Jerry. It's sad that we no longer dream big things. Can you just imagine the folks in our age group back in the early 60's as JFK pledged to put a man on the moon by the end of the decade?

Our country aches for that kind of forward thinking again. Instead, we are almost sure that our country is collapsing around us and we mourn for what was. We just seem to be led these days by little men with little ideas..and barren of dreams.

In the 1960's, 10% of the GDP was spent on non defense expenditures. Today, it is 18% (http://www.cato.org/pubs/pas/pa-281.html). As a nation, our pols have reflected the will of the majority to pay for social programs at the expense of other things. NASA is expendable. Welfare for Da'Quitha and her four illegitimate children is not. We get the government (and the country) we deserve.

True, Randy. Again I quote Lyndon Johnson after passing the Great Society Program, along with the war on poverty:

"We'll have them niggers voting Democrat for the next 100 years!".

Now the Dems have expanded that to illegal Mexicans...and that's a lot of future voters.

We just seem to be led these days by little men with little ideas..and barren of dreams.

We just seem to be led these days by little men with little ideas..and barren of dreams.

I remember my dad waking my brother and I so we could watch Neil Armstrong walk on the moon and other NASA's televised events.So much great stuff with slide rules and ingenuity.We need competition again starting with sports at any age and academics.Keep score, post grades, not everybody wins or gets an A.

I was in Vietnam, Craig, for the first moon landing. No TV but we listened to it on Armed Forces Radio and got the pics the next day in the Stars and Stripes newspaper. I was on duty and looking up at the sky that night. Sometime during the radio coverage we also learned that Eisenhower had died.

Even then, as an eighteen year old, I could appreciate the irony of one era ending and a new one beginning.

Bear witness to the twilight of western civilization, and lament for what's been lost.
I would encourage all to spend 5 minutes today and read "Sundown at Coffin Rock".

Just read parts 1 and 2, Brian. All will eventually be true...no fiction there at all. Thanks.