The Death of Chauvinism..And Romance 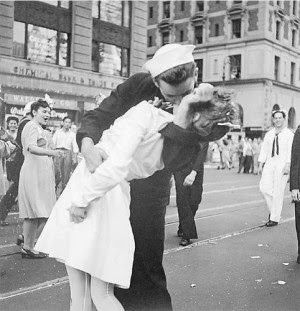 Back in March I posted this blog.  Some may have thought me a bit snarky here.  However, just today (23 Sept 2014) I read that the LGBT community are up in arms over our sending a sculpture of this event over to Normandy to be displayed there for a year.  The 50 foot sculpture is called "Unconditional Surrender" which I assume is also sexist.  Well, dear readers, it looks like I was just about right on the snark.  I'm reposting this today in protest of the LGBT protest.   Hey, LGBT folks!  Sometimes a banana is just a banana! 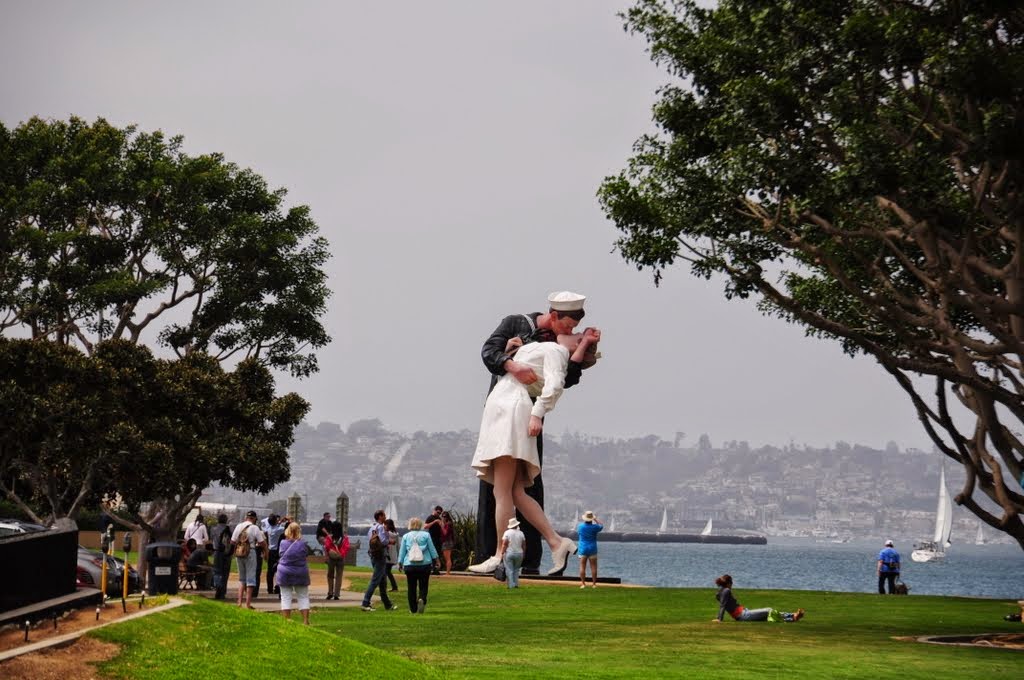 Glenn McDuffie died last week.  He was the navy sailor who grabbed the nurse and kissed her in Times Square on VJ (Victory Over Japan) Day.  The photo is the most iconic photo to appear in the last 75 years or so.  Men like it because they would like to have been old Glenn, and women like it without knowing why.

Today's feminists hate the picture.  They say the very idea that a strange man can come along and steal a kiss and a hug is just wrong.  A couple of years ago, during a gay pride parade in Times Square the photo was re-created...except this time a lesbian dyke in a sailor suit was the aggressor and the "rainbow" crowd hooped and hollered and really enjoyed poking fun at arrogant male chauvinism.

Some how the lesbian pic just doesn't have the sense of romance, of spontaneous joy as the original.  Oh,  they've tried it with two guys kissing in the same spot, and I guess it gives gays a real kick but doesn't do much for me.

Well, being an old man now, and someone who was raised when women were "suppressed", I found the photo to be utterly charming.  Glenn McDuffie says he was actually on his way to catch a subway to visit his girl friend in Brooklyn when he saw the announcement on a Times Square banner and he was so elated that he grabbed the nearest girl and kissed her in a fit of joy.  If you look at the photo you'll see that the girl on the receiving end of that kiss, a nurse, was not flailing her arms in protest.  Though she was not actively embracing Glenn she seemed more than happy to give one up for the "home team."

A couple of years ago I wrote a blog titled "In 50 Years We'll All Be Chicks".  In it, I bemoan the new "uber rise" of the American woman and the receding masculinity of the American male.  This is proven out time and again as we now see women out doing men in education degrees, job security, independence from males via the large and ever expanding federal programs that assures generous benefits for unmarried mothers, and the freedom to have sex with a hundred different partners if that's what she desires.

I miss the era when holding a door open for a lady was in vogue, or being the protector, of honoring women as the queen of the home and intuitively knowing women were the softer sex; the kind and gentler species of humans.  I miss the era where women were soft and curvy,  where a few extra pounds was sexy.  Instead, today's women want biceps and six pack abs and want their hip bones showing so they can be considered "fit".

"Eck".."Blah"...friends and family always said I had above average looks in my day, but I'll tell you this:  I wouldn't have been attracted to bony and sinewy, so called women today...I would never be attracted to a woman who has more impressive abs than I.  And they would have never got me to shave my chest and arm and leg hair even if they withheld sex for a year!...it is just too weird watching these feminine metro-sexuals walking around today, with their perfumes and hairless as a Mexican terrier.

Before the women get all up in arms, let me say that I'm glad job discrimination against women is over.  I'm glad women are no longer scorned because of divorce...but the scales seems to have fallen out of balance once again.  Too many women feel they have to be tough to make it in their career, too many women look down on women who want to be stay at home wives and moms.

I guess I just miss the romance that existed in my day.  Men danced with women and not other men as they do today...women danced with men and not other women as they do today.  And I miss the softness of the old fashioned female of my day, the smart women who let their husband think they were king of the jungle, yet could tame that tiger with a smile and a look.  Women have always ran things...it's just that today they want you to damn well understand that they do....and diminish your role as a man in the process.

Good thing old Glenn is gone.  Had he tried to kiss a girl like that in the streets of America today he'd be called a male chauvinist pig and charged with sexual assault.  Rest in peace, Glenn.

Sorry you have been feeling under the weather, hope it is recuperable and you get back to form. In the meantime it is an opportunity to look at your past blogs. Enjoy the rest.

Sad to hear you weren't feeling well,hope you get a speedy and full recovery.Glenn would also have to attend sensitivity training and possibly register as a sex offender.I agree skinny women are not attractive and rightly deserve equal compensation for doing the same careers as men. Women are all about being tough until changing a tire, fixing the plumbing etc., then being the softer sex and using it their advantage is suddenly task#1. Have a restful and recouperative day.

Chauvanism was always present when I was humping ammo. A wonderful brave mew world we live in now. Some how I just don't feel as safe as I use to!

Thanks, Jerry. Hope you have been enjoying my old blogs.

Craig, re "skinny women", I was reading recently one of those women articles from "Shine" on Yahoo. They did a poll of women today and they showed a photo of Marilyn Monroe standing over that subway grate in N.Y.C., her skirt flowing outward...they asked the women if Marilyn was too fat, and sadly, the majority thought she was. Are you kidding me? I loved all those soft curves, soft belly and soft tapering leg!

I readily admit that men in my younger days could be real pigs, but they were in the minority; most of us just wanted to be loved, to know we had someone on our side, to be able to give a love card for no reason...or a bouquet of roses, and have them appreciated. And I've found that women who treat their men like "heroes" will have men who really try to live up to that role.

I don't cast blame on women today; they have been raised in the age of feminism...I just miss an era when women were what gave us whatever tenderness and consideration for others that we had.

Couldn't have said it better, Craig...we're getting very offended!