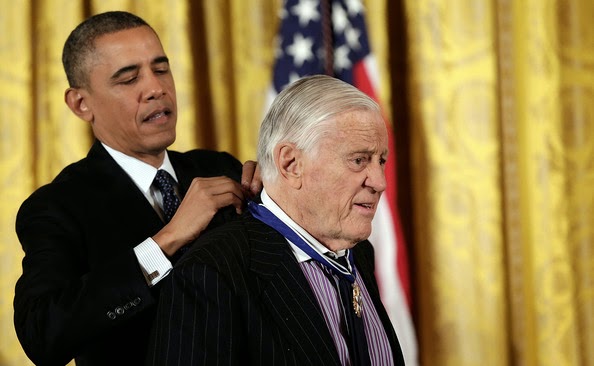 Okay, I know this is nit-picking to the extreme.  And I know today's blog may say more about my weird thought processes than it does about Obama.  But I was reading an article about former Washington Post Editor, Ben Bradlee, and came across this pic of Obama awarding Ben the Presidential Medal of Freedom.

Somehow I could not divert my eyes away from those spindly and weak Obama wrists.  To me, those wrists say all we need to know about the man.  After all, those wrists never swung a hundred pound box of wine grapes up on a moving trailer for eight hours on a blistering summer day.  They didn't pull fifty pound boxes off a warehouse shelf and deliver them to the front counter...hell, they didn't even push a lawn mower to earn pocket money.  We do know that the only job Obama held as a youth was at a Baskin Robbins ice cream shop.  He was forced to scoop 4 ounces of ice cream onto a one ounce sugar cone in the air conditioned comfort of a Honolulu BR shop...and that was for a few weeks one summer.

And, god forbid, how much more limp wristed and spindly would they be had he not participated in those basketball scrimmages behind the White House...you know the ones...where Lebron and Dwayne let him dunk on them.  Maybe Barack's golf game will tone those wrists up a bit more...but I can certainly see why he shoots those three digit golf scores.  With those wrists,  more fitting for a twelve year old, I'd be surprised if he can drive a golf ball over 125 yards or so.

Those wrists are as flighty as the man himself, as empty of sinew as the man who owns them; the master of flight whenever a crisis erupts...wrists that are adept at pushing the blame away from himself and leavening it onto others.

Thank god Barack did not try to serve in the military...can you imagine those wrists doing push-ups?  Or holding his weight as he traversed a fifty foot row of monkey bars with a huge mud hole threatening to swallow you should your hands slip?  Or rappelling down a guard tower?  Or firmly grasping the wide handles of a 50 caliber machine gun as it's rapping out 500 hundred round a minute?

No, Barry is more adept at holding a phone and a pen...and wielding the words that prove so divisive that everyone hates everyone else these days....pretty impressive for a limp wristed little "man-child" who should never had been allowed to occupy the White House.
Posted by A Modest Scribler at 2:00 AM